Apple today announced that its ConnectED program, which saw the company donating $100 million in products to schools and teachers across the country, has impacted the lives of more than 30,000 students.

As of the 2016-2017 school year, there are 32,145 students at underserved public schools who have received iPads from Apple to bolster their education. Teachers have received more than 9,042 Macs and iPads and Apple has helped to install 189 miles of internet cable in schools. 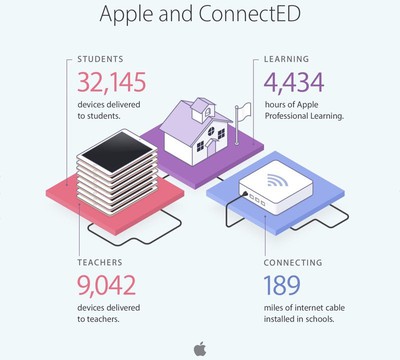 Along with equipment, Apple sends Professional Learning Specialists to schools around the country to help administrators, teachers, and students get the most out of the technology.

Apple joined ConnectED, a $750 million corporate educational initiative announced by President Obama, in 2014 and has since remained committed to providing underserved schools with cutting edge classroom equipment. Other companies involved in the ConnectED initiative include AT&T, Verizon, and Microsoft.

blut haus
hate to be a negative nancy, but when I worked in higher ed the schools we threw money and ipads at ended up calling it a waste of time and money. You can't just throw tech at a problem and expect it will fix itself.
Score: 7 Votes (Like | Disagree)

blacktape242
underserved public schools? sounds like the tax system isn't working right since they fund the crap public school system. and who suffers? the kids, good for apple to help.
Score: 2 Votes (Like | Disagree)

rmanbike
Indianola, Ive been their, very small town in the middle of cotton fields. Providing Professional Learning Specialists is the key for initiatives like this to work. Good work!
Score: 2 Votes (Like | Disagree)

hate to be a negative nancy, but when I worked in higher ed the schools we threw money and ipads at ended up calling it a waste of time and money. You can't just throw tech at a problem and expect it will fix itself.

Steve Jobs himself said almost the exact same when interviewed about classroom technology in the 90's. No amount of fancy toys will make up for a lack of a strong curriculum and good teachers.

And he was also a white board fundamentalist when it came to his own group sessions.
Score: 1 Votes (Like | Disagree)

CrystalQuest76
This program will and is creating a large number of participants of the apple eco-system. This will increase the likelihood of future loyal customers that will spend lots of money buying apple products and services. This program will have long term positive consequences on apple's profit.
[doublepost=1470866402][/doublepost]

underserved public schools? sounds like the tax system isn't working right since they fund the crap public school system. and who suffers? the kids, good for apple to help.

Public schools in the United States do not get to pick and choose the students they are required to teach. They have to teach the high-achieving gifted child as well as the developmentally-disabled child. Public schools are dependent on taxes raised from local property taxes and hope for additional funds from the state. If the school is in a poor area, there is not likely to be wealthy parents that can fund a PTA that pays for funding short-falls that cover for paper for handouts or up to date text books. Unlike many other nations, adults talk about educators with disrespect and contempt that is then passed onto their children that makes it very challenging for the teachers to then manage and teach those little monsters. Adults need to bread less so that there will be fewer children that are required to be taught and fewer children in the classroom to manage and educate.
Score: 1 Votes (Like | Disagree)
Read All Comments