Somaltus, LLC has filed a complaint against Apple today in an Eastern Texas district court, accusing the iPhone maker of infringing upon its 2010 patent related to complex battery technologies. The small Frisco, Texas-based firm also filed lawsuits against Asus, Lenovo, Samsung, Sony, and Toshiba over the same patent. 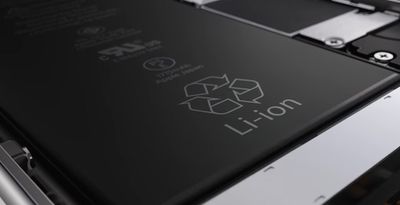 The lawsuit claims that the iPhone 6s and any similar devices sold by Apple infringe upon U.S. Patent No. 7,657,386, titled "Integrated Battery Service System," and seeks unspecified monetary damages or, alternatively, a running royalty on sales of infringing devices from the time of judgment going forward.

Defendant sells, offers to sell, and/or uses telephones including, without limitation, the iPhone 6s (the "Product"), for example, and any similar devices, which infringe at least Claim 1 of the ‘386 Patent.

On information and belief, the Product includes a battery service system including a processor (e.g., the A9 chip), which is configured to receive signals from connectors coupled to a battery (e.g., the Product's rechargeable lithium-ion battery).

Specifically, it appears that the infringement claim at least partially relates to the iPhone's process of charging in fast-charge mode until the battery reaches 80% capacity, and then adjusting to trickle-charge mode above 80% capacity.

Somaltus, LLC generally fits the description of a "patent troll," as it does not appear to provide any obvious products or services and lacks an easily identifiable online presence. Nevertheless, it has successfully reached out-of-court settlements with automakers like Ford and Nissan in the past in relation to the same particular patent.

The legal complaint's case number is 2:16-cv-00758 in the U.S. District Court for the Eastern District of Texas.

bushido
i honestly dont understand how one can still innovate something these days without falling into the trap of some patent troll.
Score: 27 Votes (Like | Disagree)

Can we sue Apple etc for their battery technology being utterly useless?

No, but you can buy phones from other companies that meet your needs.
Score: 24 Votes (Like | Disagree)

jonblatho
That's it; now Jony's just gonna have to get rid of the battery altogether.

omihek
How to be a patent troll:

1. Find a technology everyone uses.
2. Create and patent the obvious next iteration of said technology.
3. Wait for everyone to upgrade their technology to the next obvious iteration.
4. Sue everyone.
Score: 14 Votes (Like | Disagree)

ravenstar
For crying out loud, this isn't even patent worthy. People had been doing this with manual battery chargers long before Lithium batteries were even imagined.
Score: 11 Votes (Like | Disagree)
Read All Comments