There's been some speculation that the dark theme of Apple's Worldwide Developers Conference website and WWDC app are hinting at a potential dark mode set to be released as part of iOS 10, and a new set of concept images from iHelpBR imagines what a dark mode setting could look like on iOS devices. 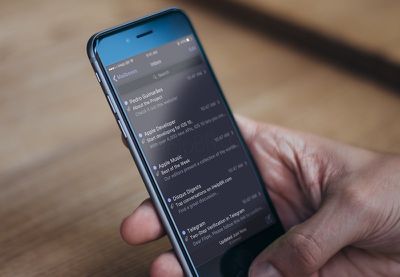 A system-wide dark mode is depicted in the images, offering up an example of what darker backgrounds would look like in Messages, Mail, Contacts, News, and more. iHelpBR speculates that such a feature could be set to come on automatically when the sun sets, darkening the entire operating system as is currently done in the Maps app.

The site images a dark mode that would extend to built-in Apple apps and system menus, as well as third-party apps using a potential dark mode API.

OS X has had a dark mode since the 2014 launch of OS X Yosemite, with a darker menu bar, dock, and system menus, and since then, it's been a highly desired feature for iOS. Despite the darker look of Apple's WWDC app and WWDC website, there is no concrete evidence a dark mode is coming, but it's a possibility. A dark mode was also featured in the iOS 10 wish list concept video created by MacStories.

iOS 10 will debut next week alongside OS X 10.12 and new versions of watchOS and tvOS. Apple is expected to show off the new operating systems at the WWDC keynote event, set to take place on June 13 at 10:00 a.m. Pacific Time. Following the keynote event, Apple will likely provide beta versions of new software to developers.

drumcat
Can we all give this a collective, "Finally..."?
Score: 70 Votes (Like | Disagree)

Split screen for iPhones? Nah...they're too small unless it's restricted to the 6+.
Score: 19 Votes (Like | Disagree)

PBRsg
Dark mode is all about AMOLED power savings.
Score: 15 Votes (Like | Disagree)

Colour me jaded, but what is the point of these? Any developer can use dark mode already in apps. So Apple are introducing it for first party apps; whoop de frigging whoo. And split screen for iPhone is just silly.

If this is the best Apple can do, then truly the time to get excited over a new iOS is gone. Guess Cook's priorities lie with sucking up to empty-headed douchebag D-list celebrities rather than focusing on products. Bloody hell.

You're getting upset by some concept photos done by a website basically guessing and wishing.
Score: 12 Votes (Like | Disagree)

Sunday February 5, 2023 6:07 am PST by Joe Rossignol
Apple has discussed selling a new top-of-the-line iPhone alongside the Pro and Pro Max models in 2024 at the earliest, according to Bloomberg's Mark Gurman. Based on this timeframe, the device would be part of the iPhone 16 lineup or later. In a September 2022 edition of his weekly "Power On" newsletter, Gurman said there was "potential" for an iPhone 15 Ultra to replace the iPhone 15 Pro...
Read Full Article • 350 comments