Microsoft has laid off hundreds of employees tied to its smartphone business, as the company finally exits the consumer phone market and attempts to streamline its worldwide mobile division (via The Verge).

The move will impact up to 1,850 jobs worldwide, said Microsoft's head of Windows and devices Terry Myerson, while up to 1,350 of the positions will be in Finland. The cuts are expected to be completed by the year's end.

The move signals the final nail in the coffin for Microsoft's Nokia business, which the company acquired under former CEO Steve Ballmer's management for $7.2 billion in 2014. Today's announcement will see $950 million written off, adding to the $7.6 billion the company wrote off last year when it cut 7,800 jobs to refocus its Windows Phone plans.

Microsoft is now shorn of almost all of its 25,000 former Nokia employees, and will only retain a small number in R&D roles. Last week, the company announced it was selling off its feature phone business to FIH Mobile, a subsidiary of Foxconn, for $350 million.

All indications point to an end of Microsoft's Lumia phones and a focus on a single Surface phone, with Myerson promising "great new devices" in an internal memo to employees, although he withheld any specific timeframe. The immediate focus for Microsoft and its new CEO, Satya Nadella, is more likely to remain on bringing the company's software and services to iOS and Android devices, rather than risk another consumer phone failure anytime soon.

Microsoft has been scaling back its consumer phone ambitions ever since its ill-fated Nokia mobile acquisition two years ago. Nokia meanwhile has shown far loftier ambitions, last month announcing its acquisition of French health tracking company Withings for an estimated $192 million, as it seeks to expand into the consumer electronics market while maintaining its networking and commercial VR business.

djcerla
Karma is a bitch. 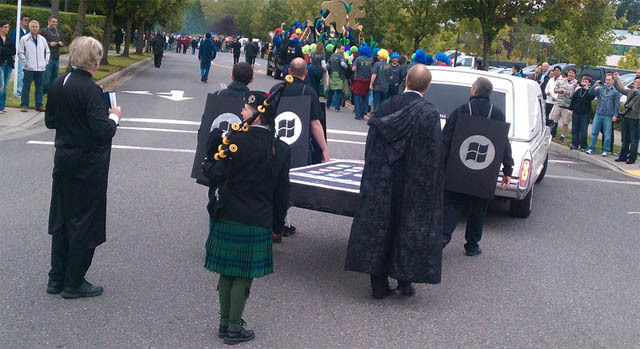 Kajje
HP (and Palm till an extend), Blackberry, Sony / Ericsson (both and both combined), Nokia, Microsoft and Motorola.

People say it's all about money. But in this situation, was it?
Score: 11 Votes (Like | Disagree)

2010mini
Sucks for all the employees when their execs make terrible decisions that lead to stuff like this. Hope their severance package is good
Score: 6 Votes (Like | Disagree)

a focus on a single Surface phone,

I can't say that a Surface phone will be any more successful. I know the Surface Pro line is very successful, but will they be looking to run a full version of windows, which is what the SP run? If not, how different will the Surface phone be, from the old Lumia
Score: 6 Votes (Like | Disagree)

Mr. Dee
Coming from a Windows centric background, even I saw the writing on the wall as far back as 2013 that this acquisition was going no where. The desperation was just out of control under Steve Ballmer's leadership after his failed attempts in the early smartphone race. He was so naïve for dismissing the iPhone back January 2007. Even I saw the iPhone as an immediate game changer when Steve demoed it at Macworld.

Google saw it too and immediately reversed their plans. Steve Ballmer should have gathered team the same day and have what is now Windows Phone OS ready by at least fall of '08. They would have been a bit behind, but not by much. The market would have been likely split between Microsoft, Google and Apple. Anyway, I have moved on and I am enjoying my iPhone 6s. The fact that my iPhone 4s from 2011 which I use as an iPod can run iOS 9.3 while my Nokia Lumia 625 from 2013 is still stuck on Windows Phone OS 8.1 with mediocre apps just proves Microsoft still doesn't get mobile.
Score: 5 Votes (Like | Disagree)

Sucks for all the employees when their execs make terrible decisions that lead to stuff like this. Hope their severance package is good

This is what annoys me and what surprises me even more is despite the public failing the execs usually land in another high profile role.
It could be naivety on my part but I just don't get why/how this keeps happening.
Score: 3 Votes (Like | Disagree)
Read All Comments