As a few users have noticed over the past day, Spotify has begun rolling out a small but significant design change to its iOS app that does away with the hamburger menu and replaces it with an easier-to-understand navigation bar across the bottom of the experience. The new bar more closely resembles the rest of the apps in Apple's ecosystem, particularly the navigation menu on its own streaming music service, Apple Music, which is now rumored for a design overhaul announcement at WWDC.

Before the update, Spotify users had to tap on the three-line hamburger button in the top-left corner of the app to open up a launch pad menu that would bring them to other sections of the service like its radio and music library. Hiding much-needed areas of Spotify from the immediate view of its users made it somewhat of a hassle, especially for newcomers, so the introduction of the straightforward traversal cues presented by the navigation bar should help everyone out. 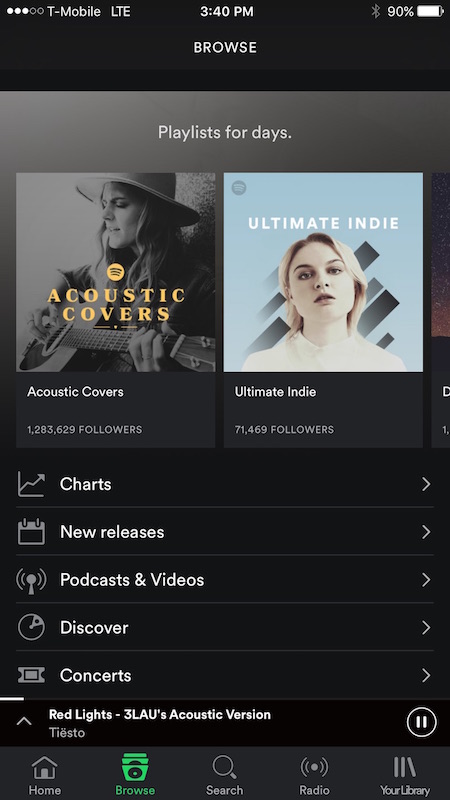 Specifically, the new bar houses tabs for Spotify's Home launching pad, an area to browse new music, a search function, access to radio, and your own library of music. Understandably, some in-house testing by Spotify discovered that with the tab bar, user interactivity with these menu options jumped up 30 percent over the hamburger UI, while also encouraging new music and artist discovery and keeping users inside the service instead of seeking alternative solutions in other music streaming apps.

iPhone users in the United States, United Kingdom, Germany, Austria, and Sweden will begin seeing the navigation bar update as the rollout continues today, with the company promising additional markets and platforms in the coming months. Spotify Music is available to download from the App Store for free. [Direct Link]

masteroflondon
"across the bottom of the experience" ?
Rating: 12 Votes

smacrumon
[FONT=Arial][SIZE=4]Hamburger requires an extra touch just to reveal what's available inside the bun. Less touches the better.
Keeping it clear, simple and easy to use. What a brilliant formula.[/SIZE][/FONT]
Rating: 8 Votes

dannys1
"Hamburger menu" is one of cringiest terms ever. I refuse to use it.
Rating: 7 Votes

Corrode
Thanks goodness the hamburger seems to be dying across most apps. The bottom menu of five is much better UX.
Rating: 7 Votes

leoformaggio
Well done, Spotify! But actually this is a tab bar, not a navigation bar. Please, update the article if possible. Reference: https://developer.apple.com/library/ios/documentation/UserExperience/Conceptual/MobileHIG/Bars.html#//apple_ref/doc/uid/TP40006556-CH12-SW52
Rating: 5 Votes

Rogifan
Now if apps can just get rid of the elipse....yes I'm looking at you Apple Music.
Rating: 4 Votes

nfl46
This is way better like this! Great job, Spotify!
Rating: 4 Votes

hfletcher
I already found the Spotify app much easier to navigate than Apple Music.

This is a welcome change that will make it even easier
Rating: 4 Votes

zorinlynx
This is one of the things that really bugs me, and it's happening more lately.

Back in 2007 when Apple released the iPhone they created an easy to use, efficient UI paradigm. It was quickly adopted by most third party apps and most of them were easy and enjoyable to use as a result.

Then, a few years later, apps started trying out new UI schemes just "to be different" and edgy. Of course, these schemes weren't as easy to use, but the companies wanted their apps to be seen as fresh and not another rehash of what's come before. The result was atrocious UI design as found in Spotify and even Apple's own Music app.

Companies need to stop trying to be "different" and they need to start working on good UI design again. If a UI paradigm is so good that multiple companies end up using it, so what? It's a good paradigm. It makes apps easy and fun to use. Leave it be.
Rating: 3 Votes
[ Read All Comments ]