Facebook Messenger for iOS is gaining native Dropbox integration for the first time, allowing users to share any file stored in their Dropbox account without having to leave the app.

Tapping the More button in the popular messenger app now displays Dropbox as an available source. So long as the Dropbox app is installed on the device and an account is linked to it, users can share photos, videos and other files stored in the file hosting service directly in their conversations. 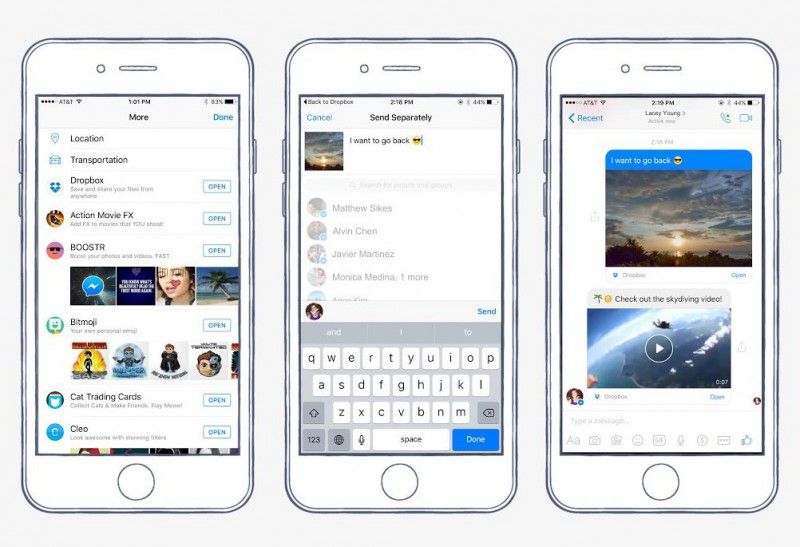 Videos and images – including animated GIFs – are displayed directly in conversations. Everything else can be viewed by recipients by tapping an Open button which brings them to either the Dropbox app or an associated web location, where they can preview and save files instantly.

In an additional feature, users of Messenger video chat now have the option of viewing a small 'chat head' in the corner of their screen during conversations, rather than video feeds occupying the entire screen, allowing users to continue messaging other people as they talk.

Both features are being rolled out to all Messenger users in the next few days. Facebook Messenger is a free download from the App Store for iPhone and iPad. [Direct Link]

Sirious
Facebook and Messenger need to gain a feature where they break down what they've added in the update
Rating: 3 Votes

They're being lazy. They're clearly using one of the Agile Development methodologies, like Scrum, which entail working in a fixed timeframe (a "sprint", commonly two weeks), having a stack of requests (called "user stories") to do sorted in order of importance, and picking the top N of those to code, to fill the timeframe. They have in hand a specific list of what was added, already in very user-friendly language (because of the nature of the process), they could simply add the titles of the user stories that got implemented in that sprint (possibly with a little massaging). But... they apparently feel their users are idiots, so instead of giving information - for the folks who have auto-updating turned off and are thus indicating they're interested in knowing what changed - they put in an incredibly condescending, "oh don't worry your pretty little head, go turn on auto updates so that you won't be scared by these confusing updates" message - and that really pisses me off. :mad:
Rating: 2 Votes

ohbrilliance
Now if only they wouldn't treat their customers with contempt and:
1) add a logout function in iOS Messenger. It's ridiculous to have to log out by killing the session from another Facebook login, and
2) Stop nagging about enabling notifications. I don't ever want notifications from Messenger and have left it as such intentionally.
Rating: 2 Votes

It's through iOS's file management API, right? At least they don't get your account. Also, I wouldn't store highly sensitive data on Dropbox in the first place. No reason to trust them any more than Facebook.
[doublepost=1460494459][/doublepost]I used to think Dropbox was great and kept all my schoolwork there... until I learned* how to use git and found out about BitBucket.

This. That's the most irritating thing about these apps is they never say anything in the update log on the App Store.

Yep. :mad: If an app doesn't have a changelog, I don't update it.
Rating: 1 Votes


Fixed that for you.
Rating: 1 Votes

macintologist
I don't get it. I like Dropbox on macOS, but I rarely use it on mobile. If I do, it's the official app, or through MS Word. I definitely won't use it on Facebook Messenger!
Rating: 1 Votes

Just FYI it's iPhone Messenger that needs this; you can do it on iPad.
Rating: 1 Votes

Altis
Is anyone at all uneasy about letting Facebook have access to Dropbox, or anything at all?
Rating: 1 Votes
[ Read All Comments ]