According to TechCrunch, Apple's goal with Safari Technology Preview is to gather feedback from developers on its browser development ahead of launch through a method that's more easily accessible than WebKit. 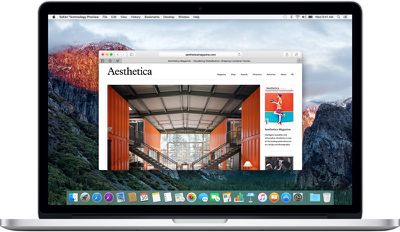 Of course, Apple has for a long time offered Nightly builds of WebKit, the open source browser engine that today runs on hundreds of millions of devices and powers Apple's Safari. However, getting access to these builds takes a bit more effort than using the new Safari Technology Preview browser. Instead, with the new browser, its updates are distributed every two weeks by way of the Mac App Store's software update mechanism. That means it's less hassle to run a browser that features the latest advances in web technologies, including HTML, JavaScript, CSS and WebKit.

Safari Technology Preview can be run side-by-side with the existing Safari browser, and it's able to be set as the default browser on a machine. It includes local data stores for history, bookmarks, cookies, and cache, and it supports syncing of browsing history and bookmarks over iCloud. Visually, the Safari Technology Preview icon is designed to resemble the Safari icon, but it is purple in color instead of blue.

Fuchal
The best part about this for me is that the icon is purple.
Score: 15 Votes (Like | Disagree)

macduke
They should make this available for iOS. How are professionals using iPad Pro supposed to test their websites? If Apple doesn't take the iPad Pro seriously then professionals aren't going to use it.
Score: 8 Votes (Like | Disagree)

They should make this available for iOS. How are professionals using iPad Pro supposed to test their websites? If Apple doesn't take the iPad Pro seriously then professionals aren't going to use it.

This just goes to show how iPad Pro is not really a laptop replacement after all (just one example out of many). It's a marketing gimmick.
Score: 8 Votes (Like | Disagree)

Will this allow me to actually close YouTube tabs and windows without crashing the entire GUI ('https://discussions.apple.com/thread/7282867') and forcing me to restart, unlike Safari? How long do we have to go before Safari can work with YouTube on recent machines with El Capitan again?

I have not experienced this once and it is not at all normal. Do you have any third-party extensions or plugins that may be causing this?
Score: 7 Votes (Like | Disagree)

Westside guy
I strongly suspect any actual useful feedback coming from actual developers is going to be drowned out by the cacophony coming from the hipsters / fanboys / other people with too much free time on their hands.
Score: 5 Votes (Like | Disagree)

Dilster3k
I'm very excited and I don't know why.
Score: 5 Votes (Like | Disagree)
Read All Comments

Monday October 3, 2022 7:53 am PDT by Joe Rossignol
iOS 16.0.2 was released last month with several bug fixes for iPhone 14 issues, excessive copy and paste permission prompts, and more. Now, evidence suggests that Apple is planning to release iOS 16.0.3 with additional bug fixes. Evidence of an upcoming iOS 16.0.3 software update has shown up in MacRumors analytics logs, which have been a reliable indicator in the past. There are several...
Read Full Article • 100 comments