Earlier this month, Apple quietly introduced a new "Podcasts Connect" tool for people who upload their podcasts to iTunes. Previously, podcasters uploaded their content using the "Submit a Podcast" link in the iTunes Podcast Store, but now there's a dedicated portal for managing podcast uploads.

As described by Libsyn, the Podcasts Connect portal lets users submit new podcasts and manage existing podcasts using their Apple IDs. Uploading a podcast is as simple as entering an RSS feed URL and there are new features that make it easier for podcasters to update their content. 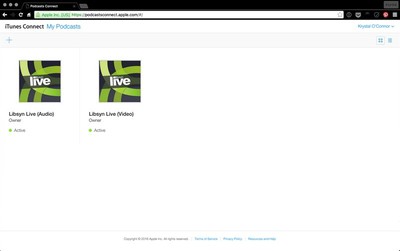 Refreshing an RSS feed via the portal will allow for quick fixes and changes to be synced to iTunes, and there are tools for hiding podcasts and deleting them from the iTunes podcast directory. The portal will also give podcasters information on the current status of their uploaded podcasts.

Apple has been sending emails to customers who upload podcasts to let them know about the new Podcasts Connect tool, which is also accompanied by improved support resources for podcast providers and HTTPS support for the podcast metadata, cover art, and episode files.

How about a fullscreen option for video podcasts on iPad? It was there for years until Apple removed it with iOS 9. Please bring back the fullscreen playback of video podcasts! How hard can it be?
Score: 2 Votes (Like | Disagree)

It's just that TAL is a very high-budget program, carrying over a massive already-existing audience from public radio. That's just not representative of podcasting in general or any kind of costs associated, etc.

For example, if you don't care about having your own website or stats, you can start a podcast on Libsyn with it's feed and a webpage for $5 /mo (with the storage limitations, you'd have to do a shorter weekly show, or a longer monthly show, etc.... by shorter I mean like ~30 min) and can even use your computer's built-in mic if you don't care much about audio quality.

I'd guess that the average beginner or smaller podcaster probably spends $15/mo on media hosting, ~$10/mo on website hosting, and $50-100 on their mic, and maybe a bit more on various software/services, though most can be done for free with some work. That, of course, doesn't count the value of the massive amount of time invested.

More medium level podcasters might spend a bit more on their media hosting, but probably not much (I don't think higher pricing kicks in until you get to bigger commercial ventures with a LOT of downloads, it's typically more feature oriented in terms of pricing). They might spend $20-$50 on website hosting (better host to handle more traffic), and some money on services or plugins for that website ($100 - $1000+). They often buy better mics, but don't necessarily need to, along with a mixer or other audio gear ($300 - $1500). They probably buy some software for editing the audio, have audio bumpers made or buy stock-audio, etc. ($100 - $500). Stuff like that. Again, that doesn't include the massive time investment.

So, I'm absolutely behind you in saying that if you get value from a particular podcast, ABSOLUTELY support them! (including TAL). But, I'd never suggest that TAL is a good representation of the costs involved in podcasting. I think that's why we jumped on your post. :)

Fair enough. You sound pretty experienced in this - what is your mic of choice?
Score: 1 Votes (Like | Disagree)

Glassed Silver
I'm glad that Apple keeps thinking of Podcasts, even though they really messed up the Podcasts app for iOS to the point where I'd rather not try my luck again.
Whenever I see a story about Apple doing this or that for Podcasts I'm baffled they still chug it along.

I know Podcasts haven't dived in popularity, it's just that I got very used to Apple getting out the axe.

Just a note to the writer - Podcasts our not uploaded to itunes. Apple does not offer any hosting for podcasts files. They just link through css to files hosted elsewhere.

Yes! This is why everyone should donate to their favorite non-ad-supported podcasts when the podcast asks. In addition to the cost of staff and production, hosting costs can be quite high for a popular podcast.
Score: 1 Votes (Like | Disagree)

They have also updated the recommended artwork standards to 3000 x 3000 to be optimized for apple tv.
Score: 1 Votes (Like | Disagree)

BeSweeet
Well, it's a start. Being able to easily change feed URLs is nice. Wish you could remove deleted podcasts from your account altogether. TWiiPhone ('http://twiiphone.com/') appreciates this.
Score: 1 Votes (Like | Disagree)
Read All Comments

Friday January 15, 2021 6:17 am PST by Hartley Charlton
Incoming Intel CEO Pat Gelsinger has said that the company must "deliver better products" than Apple, which he described as a "lifestyle company," and says that Intel's best days are "in front of it" (via The Oregonian). Speaking at an Intel all-hands meeting yesterday, Gelsinger derisively implied that Apple is merely a "lifestyle company," so Intel must be able to surpass its technology: ...
Read Full Article • 278 comments