French audio company Devialet has reached a partnership with Apple that will see its high-end Phantom speaker sold at the top fourteen Apple Stores in the U.S. starting today, reports TechCrunch.

The 750-watt Phantom will sell for $1,990, while the 3000-watt Phantom Silver will cost $2,390, the same prices as purchasing either speaker directly from Devialet.

The Phantom and Phantom Silver, along with the $149 remote and the $329 Dialog bridge for connecting multiple phantoms, will initially be available at five NYC Apple Stores, two in Los Angeles, and one each in San Francisco, Palo Alto, Portland, Chicago, Dallas, Miami and Washington, D.C. They’ll cost the same as buying straight from Devialet.

The single speaker system, capable of producing "20X the power of speakers the same size," has received positive reviews from Bloomberg, TechCrunch, Wired and dozens of other media publications since launching in 2014.

By expanding and contracting its walls, it produces 1.2 tons of pressure to produce 20X the power of speakers the same size. The device required 10 years of development and $25 million in R&D. Devialet has scored over 77 patents and 37 awards for sound and design since it released its first amplifiers in 2010.

Devialet product manager Romain Salzman told TechCrunch that the company's "dream was to find an important partnership to deploy Phantom quickly all around the world."

Luckily, Salesforce CEO Marc Benioff was a big fan and hooked them up with a meeting with Angela Ahrendts, Apple’s senior vice president of retail and online stores. During their meeting at 1 Infinite Loop, Salzman tells me Ahrendts exclaimed "I love it, I want it, and we’re going to bring you all over the world."

Phantom display models will be paired with iPhones at select Apple Stores in the U.S., accompanied by a special Devialet app for testing high fidelity music.

What does 3000 watts even mean? Space heating effect?
Score: 5 Votes (Like | Disagree)

3000W output, really? Give me the figures in RMS please - I know you get peaks that go well above it but to just post that headline figure is disingenuous. I could find no real info on the website. How quickly does the bass roll off and from what point?

from sub bass at 16hz to ultra sharp sound at 25kHz, Yes but I’m assuming that response isn’t even close to flat.
Score: 3 Votes (Like | Disagree) 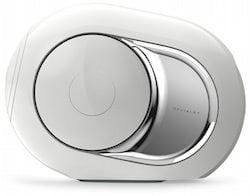 French audio company Devialet has reached a partnership with Apple that will see its high-end Phantom speaker sold at the top fourteen Apple Stores in the U.S. starting today, reports TechCrunch ('http://techcrunch.com/2015/12/08/apple-devialet-phantom/').

The 750-watt Phantom will sell for $1,990, while the 3000-watt Phantom Silver will cost $2,390, the same prices as purchasing either speaker directly from Devialet.Devialet's Phantom is a high fidelity wireless speaker that emits "implosive sound" based on patented technologies called Analog Digital Hybrid (ADH), Heart Bass Implosion (HBI) and Active Cospherical Engine Loudspeaker (ACE).

The single speaker system, capable of producing "20X the power of speakers the same size," has received positive reviews from Bloomberg, TechCrunch, Wired and dozens of other media publications since launching in 2014.Devialet product manager Romain Salzman told TechCrunch that the company's "dream was to find an important partnership to deploy Phantom quickly all around the world."Phantom display models will be paired with iPhones at select Apple Stores in the U.S., accompanied by a special Devialet app for testing high fidelity music.

glad the reports are it sounds good because it looks very ugly certainly would not wan that on display
Score: 2 Votes (Like | Disagree)

rctlr
Only two speakers.
There is no way it can produce a full range from two speakers - especially when turned up to 11.
Score: 2 Votes (Like | Disagree)

jayducharme
Bose has worked for decades to get a big sound out of small speakers. But in all cases, decent bass frequencies required a subwoofer. There has to be a large enough cavity to produce the necessary air movement. This company has supposedly developed a flexible cavity. For that price, it should sound great. But I'd have to hear the actual device.
Score: 1 Votes (Like | Disagree)

navaira
When it says single speaker does it mean it's got the BEST mono sound?
Score: 1 Votes (Like | Disagree)
Read All Comments