A drive bay with 6Gb/s interfaces for one 3.5 inch or two 2.5-inch internal SATA drives is included, with support for SSD speeds of up to 750 MB/s. The USB 3.0 ports included in the dock provide 7.5 watts of power each for charging iPads, iPhones, and other electronic devices even when a computer is turned off. 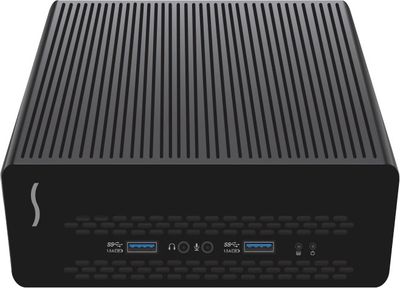 According to Sonnet, the Echo 15+'s aluminum case is sturdy enough to support the latest 27-inch iMac or a comparable display up to 34 inches.

"The Echo 15+ is the ultimate docking station for users to connect every device they need, including current and legacy devices -- even the latest Ultra HD 4K displays -- and expand their storage for backup or increased capacity in a single desktop device that connects to their computer with a Thunderbolt cable," said Greg LaPorte, vice president of sales and marketing, Sonnet Technologies. "With the option to add internal storage supporting data transfer rates of up to 750 MB/s, as well as the ability to read from and write to optical media including Blu-rayTM Disc, Sonnet's Echo 15+ Thunderbolt 2 Dock is the go-to station for flexible connectivity."

Sonnet first announced the Echo 15 Thunderbolt docking station in April of 2013 and began accepting pre-orders at that time. Following the launch of Thunderbolt 2, the dock was delayed in early 2014 as Sonnet decided to upgrade the device to support it, and nearly two years after that, the dock is finally ready.

talkybear
A dock with a fan. No thanks.
Score: 4 Votes (Like | Disagree)

avanpelt
Looks nice. Strange that they didn't include an HDMI port.
Score: 4 Votes (Like | Disagree)

The lower end model is priced a bit steep. Thought the higher-end model was reasonable given the two SSDs but then I looked up 512GB SSD prices and holy crap have they fallen since I last checked. Most are in the $150-200 range.

For the longest time I wanted a good Thunderbolt dock. The early units kept being delayed and then had crappy reviews. They also usually left out a random key feature. Then Thunderbolt 2 came along and I can't use any of these newer docks until I upgrade my 2012 rMBP. However, what I found years ago is that a USB 3.0 7 port hub and a few USB 3.0 adapters goes quite a long way. It doesn't handle the display problem but it handles everything else (eSATA adapter, several hard drives, audio inputs/outputs, ethernet, CF card readers, Wacom tablet, etc) so I only need to plug a couple things into my Mac. At first it was glitchy but the early USB 3.0 chipsets were pretty buggy in my experience. The second one I tried was fairly reliable if it didn't pull too much power and the third one, the 7-port monster that has a couple extra charging ports at the bottom is capable of powering everything I have.

My CalDigit TB2 dock is backward compatible with TB on my 15" 2012 (non-r)MBP. It even has an HDMI out. It runs dual-monitors (1600x1200) plus the internal display on the 512MB nVidia GPU (although I don't think Apple ever advertised it as capable of this). I have about 7 peripherals running across that one TB link (some TB, some USB, some HDMI).

The CalDigit is well worth the ~$200 it cost (especially for the dual monitors).
Score: 3 Votes (Like | Disagree)

How exactly is a dock supposed to provide TB3 when it's connected to a computer with only TB2?

Question: when you buy a new Mac, do you buy EVERYTHING NEW you attach to it or do you carry over external drives and other devices?

I personally don't throw everything out, because... Why?
Why make these devices not future-proof?

You have to take into account that Thunderbolt 3 is right around the corner, so while it technically isn't obsolete TODAY, it will be in a very short time, unlike 5G that still, especially depending on your region, is anything but right around the corner.
Another aspect to look at is how long these sorts of devices usually are in use, so you very well may rock an iPhone 6s for 2 years from now and just slightly tip into 5G territory towards the end of those 2 years, meanwhile, TB3, as I said, will be available soon, so if you're in the market for a new Mac then, it'll be obsolete.
Any Mac that ships with Thunderbolt 2 by then, of course, will have a sign of obsoleteness as well, as harsh as it sounds, but Apple is using obsolete technology in various cases, not just when they don't update a Mac Pro quickly enough (*cough* it's 2 years again now, but the machine is sold by Apple at 2013 prices...), but also when they didn't include, albeit possible, USB 3 or at least BT LE in late-11 iMacs, just as an example.

Obsolete technology in new products isn't anything new, it happens with many many more technologies and companies and although I don't like it, I did not mean to single out Sonnet.
Just because it is INDEED obsolete then, doesn't mean that someone won't have a use for it, if you thought my train of thought was headed that direction. :)

I just find that it's a bad timing to release this piece of device instead of waiting a little bit and shipping with TB3 or TB3 right away if possible.

'Obsolete' does not mean what you think it means.

Once a technology is no longer usable, it is obsolete. I have a film scanner for APS film. It has a 9-pin serial port and even if you have an older computer with the right port, its drivers required Windows 98, and wouldn't install on anything newer, such as Windows ME or XP. That is obsolete.

Simply having tech that is not the latest doesn't meet the criteria for obsolescence. If it still works with the majority of systems that it was intended to work with, it isn't obsolete.
Score: 3 Votes (Like | Disagree)
Read All Comments