Earlier this week, a group of black teenagers were asked to leave an Apple Store in Australia by employees who were concerned about theft. The exchange was caught on video and has since gone viral, leading to a series of apologies, from the store's senior manager and from Apple. 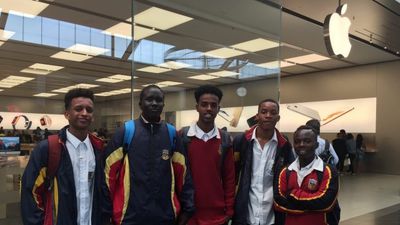 Image via The Sydney Morning Herald
Apple has released two statements on the matter, one from Apple CEO Tim Cook who said he wants "every customer visiting our stores or calling for support to feel welcome," and a second general statement clarifying Apple's core values.

"Inclusion and diversity are among Apple's core values. We believe in equality for everyone, regardless of race, age, gender, gender identity, ethnicity, religion or sexual orientation.

That applies throughout our company, around the world with no exceptions. We've looked into the details of the situation and we apologize to the customers involved. We will continue to do everything in our power to ensure all our customers are treated the way they should be."

Following the public apology, Tim Cook has now sent an internal memo to its employees, which has been shared by BuzzFeed. In the letter, Cook calls what happened "unacceptable" and says the video "does not represent our values."

He goes on to remind employees that "Apple is open" to people from "all walks of life" regardless of race, religion, gender, sexual orientation, age, disability, income, language, or point of view.

I'm sure you are all aware of the unacceptable incident which took place at our store at the Highpoint shopping center in Melbourne, Australia, on Tuesday. Several young men, who are students at a nearby school, had been asked by a security guard to leave the store. In an attempt to address the situation, one of our store employees gave an answer which shocked many of us.

What people have seen and heard from watching the video on the web does not represent our values. It is not a message we would ever want to deliver to a customer or hear ourselves. Our employee immediately expressed his regret and apologized to the students.

None of us are happy with the way this was handled. But we can all be proud of Kate, one of the senior managers at the Highpoint store.

On Wednesday, she greeted the same group of students to express a heartfelt apology on behalf of our store and our company. She reassured these young men that they and their fellow classmates would always be welcome at our store. The school's principal later told a reporter that she delivered her message "with good grace," and one of the students said, "It feels like we have justice now."

Her words that day echoed a message you've heard many times from me and from Angela. It's a simple pledge we all make to our customers and to ourselves:

Our stores and our hearts are open to people from all walks of life, regardless of race or religion, gender or sexual orientation, age, disability, income, language or point of view. All across our company, being inclusive and embracing our differences makes our products better and our stores stronger.

The Apple Store Highpoint is staffed by people who share these values and illustrate our commitment to diversity. The team is made up of coworkers from Australia, as well as Egypt, Italy, India and five other nations. Collectively they speak 15 languages, including Urdu, Portuguese, Arabic and Mandarin.

While I firmly believe that this was an isolated incident rather than a symptom of a broader problem in our stores, we will use this moment as an opportunity to learn and grow. Our store leadership teams around the world, starting in Australia, will be refreshing their training on inclusion and customer engagement. These are concepts and practices they know well, but can always stand to reinforce.

Thank you all for your dedication to Apple, to our values, and to the customers we are so very fortunate to serve.

Following the incident, the senior manager at the Apple Store where the teens were ousted invited them back along with their school principal to make a formal apology and to make it clear they are welcome in the store any time. Following the apology, one of the teens said "She apologized to us and told us that we are welcome here anytime. It feels like we have justice now."

Note: Due to the political nature of the discussion regarding this topic, the discussion thread is located in our Politics, Religion, Social Issues ('https://forums.macrumors.com/forums/politics-religion-social-issues.47/') forum.

It's sad that racial profiling and discrimination is considered "political."
Score: 60 Votes (Like | Disagree)

Aluminum213
Reminds me of the horrible comments on this website when Dr. Dre joined Apple
Score: 54 Votes (Like | Disagree)

Populism
These customers need to give Tim Cook a list of demands, including that he "admit his white privilege" and resign.

I am usually not on the PC bandwagon, but the video was clear and someone really needs to be fired over that incident. PERIOD.

Is it clear, though? There's two sides to every story. If a group of similarly-aged white kids with backpacks came into an Apple Store simultaneously, as a store owner I'd be concerned, too. Don't get me wrong - I'm NOT saying what the store owner did is right, but I'd certainly be interested as to what happened before they were asked to leave.
Score: 38 Votes (Like | Disagree)

Is it clear, though? There's two sides two every story. If a group of similarly-aged white kids with backpacks came into an Apple Store simultaneously, as a store owner I'd be concerned, to. Don't get me wrong - I'm NOT saying what the store owner did is right, but I'd certainly be interested as to what happened before they were asked to leave.

I thought exactly the same. Call me crazy for wanting to know all the facts before calling for a lynch mob.
Score: 26 Votes (Like | Disagree)

576316
A very heart felt message from Apple and Tim Cook, and the utmost respect from me for acknowledging this incident and sending out a clear message that what that employee said in no way represents Apple's values.

However there is one part that does bug me, the part where Tim mentions Apple Stores benefitting the community around them. I'm pretty sure Apple is just one of many corporate giants who continually avoid paying proper taxes in the countries in which they do their business - taxes which go on to benefit the people of that country. Apple should be at the forefront of what is right and ensure they are paying all correct taxes, in their full amount and declared in the right country. It's not a lot to ask from a company who basically have all the money in the world. Apple have the power to set a good example and set off a chain reaction.
Score: 23 Votes (Like | Disagree)
Read All Comments