As the new iPad Pro makes its way into the hands of customers, Apple has debuted two new featured sections in the App Store to highlight apps and games that are either enhanced for the device or take advantage of its larger screen.

MacRumors' sister-site AppShopper also has a running list of all the apps updated with iPad Pro support.

Pixelmator lack the retouch features on iOS so again not desktop class. 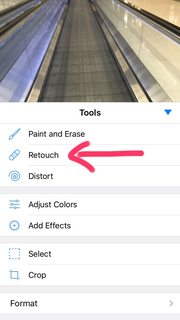 dysamoria
I just tweeted Angela Ahrendts. Hopefully her secretaries get the message in short character count. Here's the long version:

Low Pencil availability is odd. What else is odd: the Apple Store I went to had two iPad Pro units completely without power for the first two/three hours I spent there. I actually walked away from the iPads for a while to let other people try out "mine" from the two working units for a while, since I had gotten some good time with them and saw two or three groups of people come and go without getting a chance to try one. Had these other customers been more determined/disappointed-looking, I'd have given over the one I was testing, but they didn't seem super motivated.

By the time I wandered back to the iPads from looking at new iPhones, the store employees (several of which had already seen the disabled iPads hours before) had finally gotten them powered. Looks like no one takes ownership over there. (Lehigh Valley Mall store in northeast, PA)

Another confusing choice: the graphics apps. Out of all of the apps on the iPad Pro demo units, only ONE had Pencil support. Adobe Sketch. There was no Procreate. Pixelmator was an older version and was SLOW as tar (and missing many brushes in the "demo edition"). The inking app I can't recall the name of had no Pencil support. I stood there and looked up each of the art apps on the App Store to confirm that there were indeed newer versions available with Pencil support, but Apple did NOT have those versions installed.

The second of the two apps I used to test the Pencil was Apple's own Notes app. It's good that they bothered to put that much effort into Pencil support in Notes. But the Adobe app saved Apple the sale. I think Adobe has gone to crap, but their app saved the day.

Lucky for Apple, that was enough to tell me the product is something I indeed want. But they need to do better.
Score: 2 Votes (Like | Disagree)

A Pro would run OS X or a very cool hybrid of OS X and iOS. And it would have more RAM and config options. The Surface Pro 4 beats this thing on concept all day long.

Seriously? Don't know how many times it's been stated that OS X is NOT a touch friendly OS. Thus, you have iOS. And you want a hybrid? Why not shoehorn Windows 10 into the iPad while you're at it. I have the Pro and have to say that it's awesome. Not just because of the larger screen but being able to multitask with that kind of real estate really makes a difference.
Score: 2 Votes (Like | Disagree)

Which apps are listed as 'Desktop-Class'? I see two Office suites but I can't recognise the other icons.

Arg, I totally blew it. I was looking at Apple's Photo App that has a retouch on the desktop but not iOS. You are right, it has it on the iphone as you showed and also on the ipad. Totally my screw up. Thanks for calling me out. :D
Score: 1 Votes (Like | Disagree)
Read All Comments