Popular warehouse chain Sam's Club has started accepting pre-orders for Apple's iPad Pro on its website, and has listed a release date of Friday, November 13 for the device. Sam's Club began advertising the iPad Pro in emails sent out to members this morning. 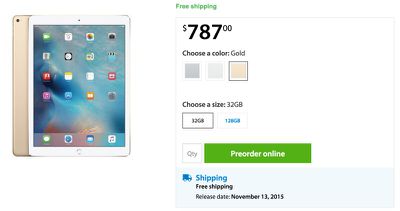 Previous rumors suggested the iPad Pro would launch on Wednesday, November 11, but Friday, November 13 perhaps makes more sense as November 11 is Veterans Day in the United States. Beyond Sam’s Club, an iPad Pro accessory maker has also claimed that Chinese resellers will be receiving iPad Pros on November 11 ahead of a November 13 launch.

Earlier this week, Apple's Eddy Cue spoke at the Dropbox Open conference where he referenced the iPad Pro and said it would be "only a few more days" until the device would be available for purchase. It remains unclear if Apple will begin accepting pre-orders next week or if the iPad Pro will go on sale without a pre-order period.

Update: As of 2 p.m. Pacific Time on Friday, Sam's Club is sold out of iPad Pro pre-orders.

Update 2: MacMall is also accepting pre-orders for the iPad Pro, but the site says orders won't ship for nine days, which would have orders arriving after the prospective November 11 or November 13 launch date. The device is estimated to be in stock at MacMall on November 15.

It's because the Apple implant is activated.
Score: 11 Votes (Like | Disagree)

iPad pro.. No 3D Touch. Over priced $100 stylus overpriced keyboard. No Mac OS support, still only iOS. What the hell does the "PRO" stand for? Does it mean intentionally half baked for PROfit?

What you want is a MacBook Pro.
Score: 11 Votes (Like | Disagree)

Waiting for you to tell me what PRO is for..

It's a tablet. It's not a PC, with a PC operating system, with apps written for PC's with a mouse, trackpad etc. That's the iPad.

nagromme
I KNOW I want it, and I know why!

- Faster than my current iPad.

- One more iPad means one more person I can game with at a time.

- Still have my old iPad if it turns out I want a small e-reader or something.

Small and light is great, but the option of "bigger" doesn't really need complex excuses to exist. It's bigger! Choose what's right for you and your budget.
Score: 10 Votes (Like | Disagree)

JeffyTheQuik
Is that pricing for Boeing people only?
Score: 10 Votes (Like | Disagree)

RealKrS
I think I want it, I just don't know why!.. :confused:
Score: 8 Votes (Like | Disagree)
Read All Comments