Apple's SVP of software and services Eddy Cue today spoke at the Dropbox Open conference, where he talked about Apple's enterprise efforts and the upcoming 12.9-inch iPad Pro in an interview with Dropbox CEO Drew Houston. Several conference attendees covered Cue's remarks in a series of tweets with the hashtag DropboxOpen, giving some insight into the topics he covered. 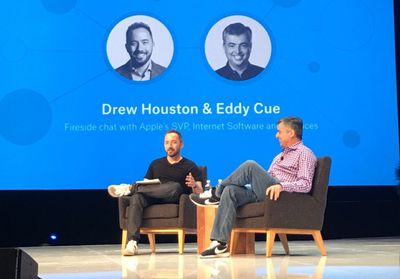 We've always been a consumer company. We've been trying to create products for individuals and part of that was creating a product that had tools that allowed people to do things with them that we could never even imagine. And what's happened is if you look at the world today you work 24 by 7.

Apple is hoping the iPad Pro will further boost its enterprise sales, with Cue saying there's still a "huge opportunity" for growth. Cue also said he believes enterprise has a long way to go to catch up on new mobile technologies the way consumers have. During the interview, Cue brought out an iPad Pro to show off on stage, and teased the audience, asking them to look under their chairs to find nothing underneath.

Eddy Cue pulled out an iPad Pro and Drew Houston said “look under your chairs, guys!” and we did and there was nothing #DropboxOpen — Casey Newton (@CaseyNewton) November 4, 2015

At the start the interview, Houston said he couldn't wait to get his hands on an iPad Pro, to which Cue responded "Only a few more days," potentially suggesting the iPad Pro's launch will happen soon. Current rumors have indicated the iPad Pro will be available in stores on November 11, but it's possible Apple could accept pre-orders before that date.
Related Roundup: iPad Pro
Buyer's Guide: 12.9" iPad Pro (Caution)
Related Forum: iPad
[ 91 comments ]

Eddy Cue is responsible for Apple Music and is the worst thing that has happened to the great company in the past four years. Once, he was great, but times change, people change, and he has sadly not kept his side of things up.

His talking about everyone working 24 7 and being on call the whole time is the most depressing thing I've heard for a long time. It's the last thing I want to hear from an Apple exec and speaks of wholly the wrong direction and ethos for Apple to be moving towards. It was this stifling total immersion philosophy that led to the information overload Apple Watch, and is symptomatic of a disease at the heart of Apple. Cook bears some responsibility for that, too, but to hear these words from Cue suggest that he is culpable to a large extent.

Sift the chaff, Apple. You desperately need a reduction in your commitments and a complete overhaul of your core products, both in hardware and especially software and services. There is so, so much that needs improving, that you must let these peripheral products go—both released and unannounced—unless you wish to inflict long-term damage on your brand.

Please keep saying no and keep the media restless and cranky. Ignore your shareholders. Nothing matters but the product.
Score: 20 Votes (Like | Disagree)

Except it wasn't a trolling comment, but an honest response to how someone feels about a brand that has lost its way.

Trolling would have involved android, how its better, how apple sucks.... etc.

I rather agree. Steve Jobs was not an inventor, despite how people try to pass him off, he was a whip cracker and a visionary. A perfectionist, and someone who instilled the fear of God in his people to not #%)# up things. He pushed people beyond their limits, and it brought great products (save Mobile Me and I will always love Steve Jobs famed fury to that team for their failure... it's re-enactment could be performed on the death star and not out of place.... "What is mobile me supposed to do?" Jobs asks. Employee answers. Jobs says, "Great, so why the F#%#) doesn't it do that? You have failed Apple, you have failed our customers, and you should hate yourselves for what you have done.")

It's not that apple is taking a down turn because Job's isn't there inventing (he never did that), they don't have someone like him ferociously hammering out ever fine detail.... Apple has made major missteps in quality in just about every area they do business. Not trolling. Fact. These are just the things Jobs would have never allowed.... Cook is more comfortable to ship then fix.... but people are noticing. Add that to a lack of real innovation or any really new products in ages, it's going to catch up and bite them if they don't return to form soon.
Score: 17 Votes (Like | Disagree)

"Cue brought out an iPad Pro to show off on stage, and teased the audience, asking them to look under their chairs to find nothing underneath. "
Score: 16 Votes (Like | Disagree)

I was rolling around on the floor laughing so hard I could barely breathe :rolleyes:

Cue brought out an iPad Pro to show off on stage, and teased the audience, asking them to look under their chairs to find nothing underneath.

Current rumors have indicated the iPad Pro will be available in stores on November 11th, not the 13th.

You have a lot of iPad's
Score: 10 Votes (Like | Disagree)
Read All Comments

Monday May 16, 2022 4:40 am PDT by Tim Hardwick
YouTuber Unbox Therapy has shared a hands-on look at the iPhone 14 Pro Max using what he claims is a one-to-one replica created by third-party case makers with access to detailed schematics and dimensions for Apple's new upcoming flagship smartphone. As with the iPhone 13 Pro lineup, in 2022, we are expecting a 6.1-inch iPhone 14 Pro and a 6.7-inch iPhone 14 Pro Max, but this time the Pro...
Read Full Article • 128 comments