Siri and other voice-activated systems can cause potentially unsafe mental distractions lasting several seconds while driving, according to a new research study by the AAA Foundation for Traffic Safety. Siri's score of 3.4 on the five-point scale is considered more distracting than Google Now's 3.0 score, but less distracting than Microsoft Cortana, which received a 3.8 rating. 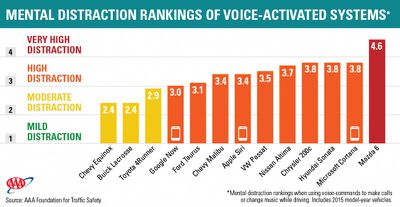 AAA's mental distraction rankings also included vehicles, ranging from the least distracting Chevy Equinox at 2.4 to the Mazda 6 at 4.6, which is nearly the highest level of cognitive distraction. The study found that mental distractions can persist for as long as 27 seconds after using hands-free or voice-activated systems, as drivers readjust to the task of driving.

“The lasting effects of mental distraction pose a hidden and pervasive danger that would likely come as a surprise to most drivers,” said Peter Kissinger, President and CEO of the AAA Foundation for Traffic Safety. “The results indicate that motorists could miss stop signs, pedestrians and other vehicles while the mind is readjusting to the task of driving.”

Researchers found that potentially unsafe levels of mental distraction can last for as long as 27 seconds after completing a distracting task in the worst-performing systems studied. At the 25 MPH speed limit in the study, drivers traveled the length of nearly three football fields during this time. When using the least distracting systems, drivers remained impaired for more than 15 seconds after completing a task.

AAA's mental distraction rankings while driving are broken down into five categories:

The study did not include the latest in-dash systems such as CarPlay or Android Auto.

The AAA Foundation for Traffic Safety published Phase I and Phase II of this study over the past few years. In the second phase, the foundation found Siri's high complexity and low intuitiveness resulted in some of the highest levels of mental distraction compared to other in-car tasks such as adjusting the radio or navigating complex menus.

sputnikv
I would suspect so, given how poorly and inconstant it works.
Score: 26 Votes (Like | Disagree)

jwdsail
I'm an in-car coach for a teen driving clinic, and frankly, any use of a phone (besides navigation) while driving is pretty ***** stupid. I teach that the phone should stay in the glove box. If you need to use it, pull the frak over. You're not POTUS, and it isn't the Red Phone ringing. It can ***** wait. Frankly, that goes for pretty much everyone on the damn road. Just pull over, or let it wait.

1. I'm on the road constantly, driving to and from clients homes and offices. I see allot of people still using their new(looking) phones in recently built cars (BMWs, Mercs, Cadys), that likely at least have bluetooth, up to their head, holding them, steering one-handed (if that).

1.b. I wonder if the people being tested on these systems had ever used any of them, which could skew the results? Based on the number of people I see driving and talking on the phone w/o even using a hands-free, I doubt that most/all had ever used any voice systems in a car before. Unfamiliarity with a system would add to the distraction levels, I'm sure.

2. What additional distractions are introduced by all the testing equipment?


* Cameras mounted inside an instrumented car to track eye and head movement of drivers.
* A Detection-Response-Task device known as the “DRT” was used to record driver reaction time in response to triggers of red and green lights added to their field of vision.
* A special electroencephalographic (EEG)-configured skull cap was used to chart participants’ brain activity so that researchers could determine mental workload.

Yes, the addition of all that crap does't skew the results *at all* ;-) That couldn't be distracting while driving.. nope. Sigh.


3. Are they testing these systems, like Siri, in a way that most people would actually use them, making and answering calls, perhaps setting up reminders, or are they having people do things they may not even do when they're not driving, like composing a post to FaceBook, as we've seen in past tests?

I'm all for promoting safety behind the wheel. I'm also all for anything that could help improve systems like Siri. Tests like these have the potential to help, but, I question the methods being used, and the usefulness of the results these methods produce.
Score: 12 Votes (Like | Disagree)

Because Siri keeps flirting with me :)

reden
I've found Siri to be most useful for setting up appointments and reminders, and it works about 95% of the time. For everything else it gets distracting because it just doesn't get it and I find myself repeating my command.
Score: 7 Votes (Like | Disagree)

I've found Siri to be most useful for setting up appointments and reminders, and it works about 95% of the time. For everything else it gets distracting because it just doesn't get it and I find myself repeating my command.

I could not agree more. Siri is FANTASTIC if I just need to make a quick reminder. But literally everything else is a struggle. To the point it's a running joke with the family when we ask Siri for something.

Sadly Google Now has been a much superior product, but is limited on what it can access on the iPhone. I don't understand how Siri has failed to lag behind for this long. We see silly articles about trivial party tricks like 'Back to the Future Day' Siri jokes....but the core of the product is still very poor

Well except for the predictable Apple defender that inevitably comes on and says Siri always works for them and I must just mumble or have an accent.
Score: 6 Votes (Like | Disagree)
Read All Comments