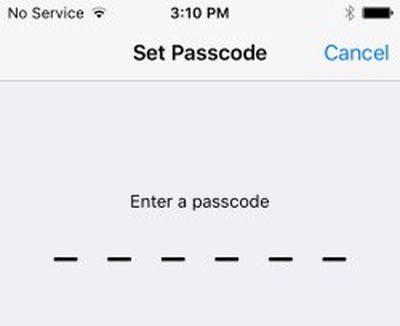 Apple this week informed a federal magistrate judge in Brooklyn, New York that it "would be impossible" for the company to access data on a locked iPhone running iOS 8 or later, reports Reuters. Apple was responding to a request from the judge, James Orenstein, to help him decide whether to fulfill a U.S. Justice Department request that would have forced Apple to help authorities gain access to a seized iPhone.

Apple's response is not a surprise, as it is the same thing the company has said several times in the past. Since iOS 8, Apple has stopped storing encryption keys for devices, making it impossible for the company to unlock iPhones and iPads under police request. Without an encryption key, Apple cannot bypass a passcode to gain access to an iOS device.

In a brief filed with the court, Apple said 90 percent of its devices are running iOS 8 or higher and are thus inaccessible. Apple is able to access the 10 percent of devices that continue to use iOS 7 or below, but the company told the judge that being forced to comply with the Justice Department's request could tarnish its brand.

"Forcing Apple to extract data in this case, absent clear legal authority to do so, could threaten the trust between Apple and its customers and substantially tarnish the Apple brand," Apple's lawyers wrote.

Apple's encryption changes, implemented in 2014 with iOS 8, have been unpopular with some law enforcement officials. FBI Director James Comey has expressed concern that encryption implemented by companies like Google and Apple lets people "place themselves above the law."

Just yesterday, Apple CEO Tim Cook told an interviewer encryption is a necessity and that software backdoors are unacceptable, reiterating Apple's long-standing opinion on the subject.

FBI Director James Comey has expressed concern ('https://www.macrumors.com/2014/09/25/rbi-concerned-with-apple-encryption/') that encryption implemented by companies like Google and Apple lets people "place themselves above the law."

I can not get over this quote.

Like mining and storing millions of communication records illegally collected from American citizens.

Like not requiring the use of a court system to subpoena information because it's inconvenient or will never been have accepted.

Like giving authority to government entities for full, free access to devices under a law that was never designed to be interpreted under today's technological conditions or by lying about the situation in which those conditions were not actually met.

neuropsychguy
This is exactly as it should be.
Score: 56 Votes (Like | Disagree)

DrewDaHilp1
Good job Apple. They courts should be forced to go to the accused, and then the accused should be able to invoke the 5th.
Score: 28 Votes (Like | Disagree)

captain cadet
For someone studying Security, If they can't crack it, they cannot crack it - The law is so far behind with technology meaning the Law is out of date!
Score: 20 Votes (Like | Disagree)

hlfway2anywhere
But won't someone please think of the children!? /s
Score: 16 Votes (Like | Disagree)
Read All Comments