Earlier today, iFixit conducted a teardown the new Magic Keyboard, Magic Trackpad 2 and Magic Mouse 2. They've now followed that up with a teardown of the brand new 21.5-inch 4K iMac, and while the majority of the insides are the same as last year's model, there are some notable differences. 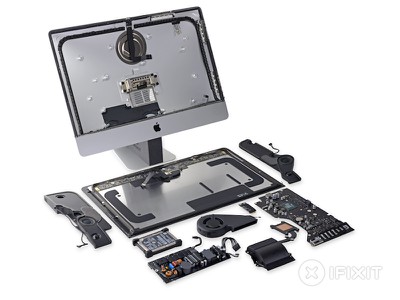 First, the teardown found that the new iMac's 4K display is manufactured by LG. The new display is DCI-P3, which features a wider color gamut than the more standard sRGB. The new iMac is one of the few devices that allows consumers to experience the new display technology.

Apple has also removed the empty PCIe SSD slot that was featured in the late 2013 iMac, which means that do-it-yourself upgraders won't be able to upgrade their machine easily. In 2012, Apple featured empty solder pads where the SSD slot would go, but in 2013 added an empty SSD slot. iFixit notes that users who want to add a Fusion Drive will either have to configure it at purchase or solder it on themselves.

Overall, iFixit gave the new 21.5-inch iMac a repairability score of 1 out of 10, which means that the new desktop computer is extremely difficult to repair. Like other iMacs, the soldered-on CPU, logic board and fused-together glass and Retina Display contribute to how difficult the new desktop is to repair.

ifixit have to fork out the $$ for their deconstruction machines as they are not getting any more (I think) thanks to their breaking of an Apple NDA a few weeks ago. Serves them right. Apple should come down on NDA breakers and make them wish they were never born. I would have taken ifixit to court if I was Apple. ifixit got off lightly with only their dev account banned.

What ifixit did was stupid and I was surprised to see them being so unprofessional and irresponsible. However, I wouldn't want to wish them bad, nor to have a multi-billion company like Apple squash them out of the earth. I've been enjoying iFixit's work for many years, it's invaluable for anyone trying to upgrade/fix their own stuff, and I don't think there are many other great sites.
Score: 65 Votes (Like | Disagree)

newdeal
the iMac has been an abomination ever since they dropped the superdrive and made it appear to be thinner without really being thinner.

No idea why they make the cpu faster year after year when for most people putting in an SSD and using a crap cpu would be a better experience
Score: 58 Votes (Like | Disagree)

Isn't this the same iFixit that lied and broke their NDA in order to get advertising clicks, and then tried to blame their lazily-ignored and non-updated app on Apple's software and accused iOS of having bugs which broke it? Sorry, but I am forced to give them a respectability score of 1 out of 10, which means whatever trust I had in their opinion is extremely difficult to repair.

Yeah, I doubt anyone cares whether you trust them or not.
Score: 46 Votes (Like | Disagree)

NY Guitarist
Love the iMac, hate that Apple is continuing down the road of making their products un-upgradable.

trifid
"Apple has also removed the empty PCIe SSD slot that was featured in the late 2013 iMac, which means that do-it-yourself upgraders won't be able to upgrade their machine easily." "...iFixit notes that users who want to add a Fusion Drive will either have to configure it at purchase or solder it on themselves."

Solder a hard drive? Are you fricking kidding me? Just when we thought the 5400rpm fiasco couldn't get any worse, wow just wow.
Score: 40 Votes (Like | Disagree)

nikhsub1
LOL @ everyone bashing ifixit - they do the apple community a service. You act like they peed in your corn flakes.
Score: 36 Votes (Like | Disagree)
Read All Comments