In late September, Apple announced that app slicing, an App Thinning feature of iOS 9, was unavailable to developers because of an iCloud backup issue. Apple today updated developers on the status of app slicing, noting that it's once again available for use following the iOS 9.0.2 update and the recent Xcode 7.0.1 update.

The issue affecting app slicing has been fixed, and device-specific versions of apps will be delivered when downloaded by users running iOS 9.0.2 or later.

App slicing is one facet of App Thinning, an iOS 9 feature designed to decrease the size of iOS apps to save valuable space on devices without a lot of storage space. With app slicing, users only download the app assets created for their particular device rather than a full set of assets for multiple devices. For example, on an iPhone 6s, a user will only need to download iPhone 6s specific files, ignoring both larger iPad artwork and lower quality resources for earlier iOS devices.

To take advantage of the space saving features in app slicing, all iOS 9 users should upgrade to iOS 9.0.2. App slicing is not available in earlier versions of iOS 9 or in iOS 8.

is there an easy way to update already downloaded apps? without deleting and reinstalling?

Developers have to add support for it to their apps, and their ability to add that support was just re-added. They'll support it in their upcoming updates. So deleting/re-installing the app today would simply overwrite today's app with another of the same. Once they release an update to support App Slicing, you'll be able to download it.
Score: 7 Votes (Like | Disagree)

DaveMcM76
I'm assuming that iTunes still downloads the full app bundle as it doesn't know which devices you may then sync it to, so does adding an app via an iTunes sync also filter out the bits you don't need or do you get the full App bundle and thus use up more space on the device than if you downloaded the app straight from the App Store on the device?
Score: 2 Votes (Like | Disagree)

is there an easy way to update already downloaded apps? without deleting and reinstalling?

In the App Store, there is a section called Updates. Apps that have available updates will show there.
Score: 2 Votes (Like | Disagree)

Oblivious.Robot
My beloved 16Gb iPad Air 2 would be so glad to hear this news!!
Score: 1 Votes (Like | Disagree)

great, glad they ironed this one out. i think this will help a lot of 16gb users

It should. But personally, unless I got a new iPhone each and every year, even with App-thinning I wouldn't consider a 16GB iPhone a prudent choice. Perhaps not future-proofed enough.
Score: 1 Votes (Like | Disagree) 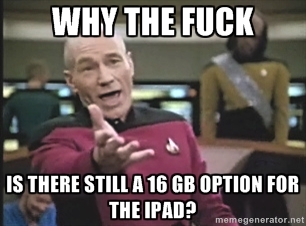 Wednesday May 5, 2021 1:29 am PDT by Tim Hardwick
Encrypted messaging app Signal has had a series of Instagram ads blocked from the social media platform, after it attempted to show users how much data the Facebook-owned company collects about them and how it's used to push targeted ads. In a blog post, Signal described how it generated the ads to show users why they were seeing them, simply by declaring upfront the information that the...
Read Full Article • 80 comments