Tapbots today launched its long-awaited Tweetbot 4 update, which brings a slew of important changes to the popular Twitter client. Most notably, today's update expands support to the iPad, making Tweetbot 4 a universal app for the first time and bringing an updated look to the tablet version of the app. 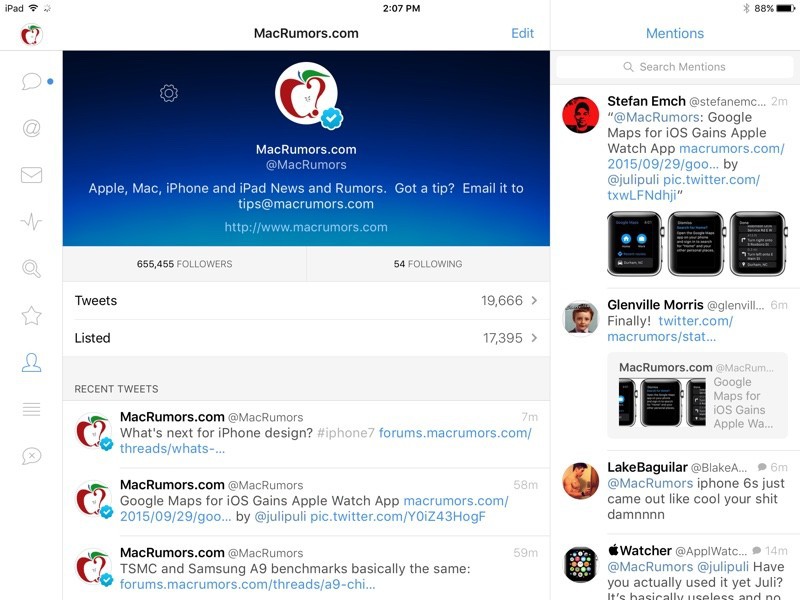 Tweetbot 4 on iPad, landscape mode
Tweetbot for the iPad has not been updated since June of 2014 and it was never given a refreshed look in line with the design updates introduced in iOS 7, so today's new iPad app is a welcome change. On the iPad, Tweetbot 4 includes the same clean design that was introduced on the iPhone with Tweetbot 3. Tweetbot 4 includes support for Apple's newest operating system, iOS 9, and it works with the split-screen multitasking feature on Apple's newer iPads.

Tweetbot 4 split-screen multitasking
For the first time, Tweetbot 4 introduces a landscape view that's available on the iPad and the iPhone. In landscape mode on the iPhone 6/6s Plus or iPad, the app is able to display two windows side-by-side, so users can watch their timelines and another section like mentions or lists at the same time.

Tweetbot 4's new landscape mode on the iPhone 6s Plus
Feature wise, the new Tweetbot includes a Statistics and Activity View. The Activity View displays Twitter's feed of recent follows, comments, and retweets, while the Statistics View gives a daily overview of retweets, follows, and favorites, all displayed on a graph.

Enjoy keeping track of how popular your tweets are or how many new followers you get each day? Fall in love with the new Statistics view. Watch your tweets get faved and retweeted in real time (on a WiFi network), and see your daily global activity graph grow over the last 7 days. See all of the recent activity happening on your account in real time on the Activity view. Watch people follow, mention, retweet, fave, and quote you live.

Mute filters have been improved in this version of the app, and there's support for Quick Reply from Notifications. It's now possible to mute keywords, hashtags, and clients directly from the dedicated mute section, and there are options for setting a specific length of time for the mute and toggling whether it affects mentions, searches, and lists.

Profiles have been redesigned to be more streamlined, and the user interface has a tweaked look that updates the colors and includes a redesigned Tweet window. Along with this, Tapbots has also included several under-the-hood optimizations that are designed to make Tweetbot 4 run better.

Redesigned look for the user interface
Tweetbot 4 is a new app that's priced at $4.99 for all users, new and old. The $4.99 price is a limited time offer to celebrate launch, after which the price will go up to $9.99. Previous Twitter users who purchased Tweetbot 3 will continue to be able to get Tweetbot 4 for $4.99 even after the launch sale has ended via a bundle discount that Tapbots is offering. [Direct Link]
Tags: Twitter, Tweetbot, Tapbots
124 comments

I already bought this app and they wanna charge me another $4.99 for the update? No way.

That's like saying I bought a Pumpkin Spice Latte two years ago and want a free refill.
Score: 4 Votes (Like | Disagree)

The guys at Tapbots lost me a long time ago when they just simply stopped updating their apps. Now I guess they are all in on Tweetbot... no thanks. Same old. They wait a long time to update an app just so they can call it a "major" version and charge you again. Pathetic. I'll never buy another app from these guys, and I've had almost all of their apps including Tweetbot (for Mac).

Yes, how dare they make anything but free upgrade for life! Don't they realize that I don't want to skip a cup of cappuccino to buy this app?! </s>
Score: 3 Votes (Like | Disagree)

furi0usbee
The guys at Tapbots lost me a long time ago when they just simply stopped updating their apps. Now I guess they are all in on Tweetbot... no thanks. Same old. They wait a long time to update an app just so they can call it a "major" version and charge you again. Pathetic. I'll never buy another app from these guys, and I've had almost all of their apps including Tweetbot (for Mac).

They have this down. Never give regular updates, then bring out the new *major* version, charge. Repeat and repeat.
Score: 3 Votes (Like | Disagree)

I used to be a huge fan of tweetbot, but their contrast seems completely insane to me. Its great for seeing who tweeted, but terrible for reading actual tweets.

That's what the dark mode is for. Stark white is horrendous.
Score: 3 Votes (Like | Disagree)

Thursday May 28, 2020 8:13 am PDT by Eric Slivka
With the release of macOS Catalina 10.15.5 and related security updates for macOS Mojave and High Sierra earlier this week, Apple is making it more difficult for users to ignore available software updates and remain on their current operating system versions. Included in the release notes for macOS Catalina 10.15.5 is the following:- Major new releases of macOS are no longer hidden when...
Read Full Article • 310 comments

Friday May 29, 2020 10:00 am PDT by Eric Slivka
Following a couple of leaks in recent weeks, Beats today is officially announcing four new colors for its Powerbeats Pro wireless earphones: Spring Yellow, Cloud Pink, Lava Red, and Glacier Blue. The new earphones will go on sale June 9 and sell for the same $249.95 price as the existing color options. Aside from the colors, the new Powerbeats Pro models are otherwise identical to the...
Read Full Article • 46 comments