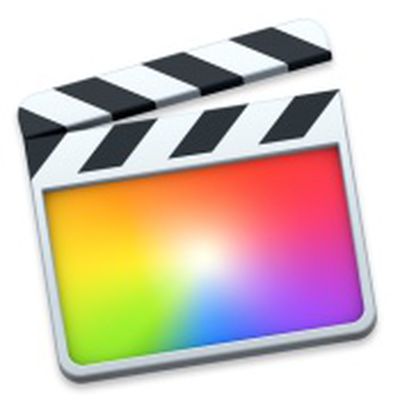 Final Cut Pro X, Motion, and Compressor received their last major updates in April of 2015, with Apple adding new features for motion graphics and enhancements to speed up video editing, packaging, and delivery.

I was a lover for FCP 7 but X just doesn't feel like a pro editing suite. The power is there but everything about it feels like it's aimed at amateurs.

Got used to Media Composer while working for a post studio and don't ever plan to go back. There are some things about avid that annoy me and always will but I feel at least Avid can do everything I need it to do.

Then I decided to take the time and put in the effort to learn FCP X, with it's magnetic, single storyline with attached clips approach and worked through the frustrations that came with expecting it to be the thing and the way I was used to for years and years and... it turns out it's freaking amazing.

I go back to FCP 7 for old projects with clients from time to time and it feels like I'm editing with a stone tablet. Everything is so rigid and unresponsive and takes so many steps. I can edit SO much faster in X, which frees me up to be more creative and get more done in my day.

Track based editing served its purpose but it's an old fashioned way of doing things that is holding great editors who are afraid of change back. Take the next step and give FCP X an honest try. It won't be easy at first but it will be so much better in the long run.
Score: 10 Votes (Like | Disagree)

Not sure how accurate this is...

I'm going to qualify myself as being a complete n00b in video editing as it's not what I "do". I am, however, a civil engineer with a long history in engineering and analytical statistics with a focus on statistical modeling. The "unstated" quantities of that "survey" and resulting "graph" is, quite simply, the sample size. That linked-to post/article reeks and smacks of BS. For instance:

* "On the plus side, Avid is cited for its power, reliability, work flow, features and linking." Cited? By who(m) - there aren't any citations listed. If the source was actually creating the "sample", they would have certainly cited their source. Not one of the "citations" are listed or, um, cited.

* What is their sample size? It's not listed, which would scare me off as a client. Early in the post/article the "48% of respondents" bit would seem, to me, to be a joke. Having been in the marketing/statistical analysis game for almost 30 years, I look for numbers they're quoting. For example, think of "7s" - 1428578, which repeats endlessly. Any time I see a number like "43%" of respondents I think that something like "3 out of 7 people said". In 1994 I was hired to help with planning a light rail project that was intended to go to a public vote, and 85% of polled meeting members voted against extending the LRT project into **** County; I looked at the data and it turned out that the same 50-odd people were going to all of the public meetings - about 50 people killed a $4B project. The survey left out too much source data to be of real use - a sample size and number of respondents should have been included in their "report" to have any real meaning in the real world IMHO; leave out key data as to sample size and your "report" means pretty much the paper it's printed on. Paper's cheap, FWIW.

* My additional counter? The thousands of FCPX users that are happy and making money are too happy making money or too busy working to bother with responding to an idiotic survey from a source they'd never heard of.

There's more that I could offer to punch mountain-sized holes in this "survey" (and, yes, I'm embellishing), but we all have other tasks we'd rather be doing.
The only other "thing" that's missing? A statement that reads something like this:
"Production Technology Survey, 2015", Sponsored by Adobe."

Disclosure: I use and subscribe to Adobe CC and also have purchased FCPX. I also printed out that Production Technology Survey, 2015 story and used it for toilet paper.
Score: 7 Votes (Like | Disagree)

jccrtv
I don't get the dislike. I LOVE FCPX and what it's become. Every time I use Premiere Pro I miss doing things the FCPX way. They have fixed most of my complaints about gaping holes when it first debuted.
Score: 7 Votes (Like | Disagree)

Haha, basically.
Not sure how accurate this is as people who voted were anyone that considers themselves an 'editor' and open to all professions and hobbyists:
http://www.televisual.com/read-reports-surveys/42/296/Editing-The-most-popular-systems.html 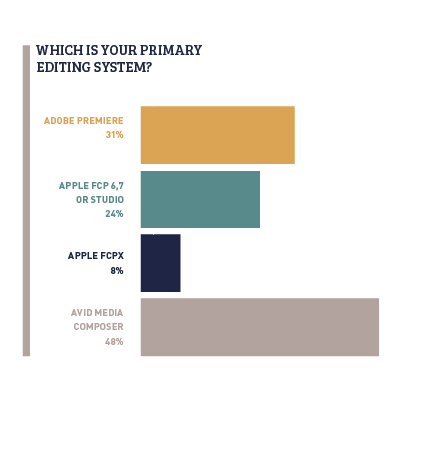 That is almost exactly what I am seeing - Apple really doesn't get what 'professionals' in the business do.

One thing SONY was smart to do was to split their business - they have a pro division that just concentrated on that segment and was the most R&D intensive. Then they let that high end tech filter down to the consumer level over time.

Apple could do it, but I fear they are becoming a 'fashion tech' company. Being fashionable is dangerous as you rely on emotional attachments, which can change.
Score: 7 Votes (Like | Disagree)

I was a lover for FCP 7 but X just doesn't feel like a pro editing suite. The power is there but everything about it feels like it's aimed at amateurs.

Got used to Media Composer while working for a post studio and don't ever plan to go back. There are some things about avid that annoy me and always will but I feel at least Avid can do everything I need it to do.

We only use FCPX in the studio for all our work. It's absolutely blazing fast when compared to Premiere. We literally just dump our 6k Dragon .R3D's straight from the RedMag into the timeline on our 5k iMacs (which are basically laptop internals with large screens, nothing serious is required like 12 core Xeons or anything) and edit natively in a 4K timeline with zero hiccups or stutter at full resolution and full raw setting support. It's just stupid easy.

If we have major color correction we export out a tiny XML from fcpx and boom, our entire edit loads natively in Davinci and then export an XML back out and switch back to FCPX and everything updates instantly.

Same exact process for sound suitening in Logic for audio.

And we pay for CC for every single employee in the office and tried Premiere and it was just simply not the fastest or easiest to work with.

And while this wasn't a factor with our decision, one of my video guys sent me this article a month or so ago and made me feel comfortable with our decision for our clients: http://nofilmschool.com/2014/09/massive-difference-export-quality-fcpx-and-premiere-pro

But alas... Just my humble experience, not to say Premiere isn't more than a solid choice and competent editor. It's functions just like FCP 7 did (the cream of the crop for years) so obviously it's good, it just wasn't AS good or fast with our workflow...
Score: 6 Votes (Like | Disagree)

martygras9
Hello? Is anyone here?