Apple CEO Tim Cook and Senior Vice President Eddy Cue received 560,000 and 350,000 restricted stock units respectively this week, worth a combined $93.8 million based on AAPL's closing price of $103.12 on Monday, according to a pair of filings with the U.S. Securities and Exchange Commission. 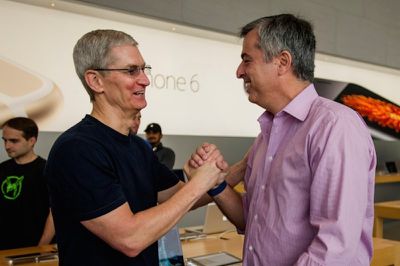 Tim Cook and Eddy Cue at an Apple Store in 2014 (Image: Bloomberg)
Cook was awarded with 280,000 performance-based restricted stock units in full based on Apple's performance relative to the other companies in the S&P 500 over a two-year period ending August 24. Apple needed to achieve a total shareholder return (TSR) of at least 41.36% to place in the top third of companies in the index, and Apple's TSR for the two-year period was 76.76%.

Cook and Cue did not sell any of their RSUs, although 290,836 and 171,853 shares were withheld by Apple respectively to satisfy the minimum statutory tax withholding requirements on vesting of RSUs. Cue transferred his remaining 178,147 shares that vested to a family trust, and he has now been awarded all 700,000 shares granted to him on September 2, 2011.

Cook has a remaining 4.76 million RSUs scheduled to vest as follows per the SEC filing:

Cook must remain employed at Apple to receive his unvested RSUs on their applicable vesting dates.

AngerDanger
And then they arm wrestled to see who'd get the lot of it.

Have a little chuckle at the cheap Foxconn staff that enabled your fortune?
Score: 22 Votes (Like | Disagree)

Hookers and blow. Lot's of 'em both. And a capuchin monkey.:cool::p
Score: 11 Votes (Like | Disagree)

There hasn't been born a single person who can't think of something to do with 94 million dollars. If you had it, you'd have no trouble finding a use for it. The lottery has proven that time and time again, although the key is to know when to stop spending. ;)
Score: 11 Votes (Like | Disagree)

I bet they could even retire if they wanted.:rolleyes:o_O

If they are careful with their money, and clipped coupons.
Score: 10 Votes (Like | Disagree)

They timed that suspiciously well.

Implying? It's stock, not money. It changes value anyway. The number of shares was based on company performance, which is strong, obviously.
Score: 9 Votes (Like | Disagree)
Read All Comments