Taiwanese website DigiTimes today reported the "iPad Pro" will enter production by the end of the third quarter and go into mass production in the fourth quarter, corroborating a recent KGI report that said the rumored 12.9-inch tablet would enter mass production in September-October. 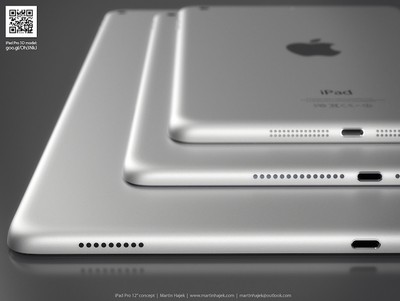 "iPad Pro" mockup places 12.9-inch tablet alongside iPad Air and iPad mini
The report claims the "iPad Pro" will be released in the fourth quarter, with an estimated 4-5 million shipments in 2015. DigiTimes reported in July that the "iPad Pro" could launch in mid-November as Foxconn prepared to start supplying components at the time, but the release timeframe remains uncertain.

The report claims Sharp will be the main supplier of LCD displays for the tablet, while Foxconn subsidiary General Interface Solution (GIS) will provide touch panels. Samsung Display and TPK will be secondary suppliers of LCD assemblies and touch modules respectively, according to the report.

ShadovvMoon
This is exactly the kind of innovation that Apple needs! Oh, wait...

WannaGoMac
Is apple basically doing what it did last time without Steve Jobs? Where they just kept adding models of computers?
Score: 24 Votes (Like | Disagree)

Menneisyys2
will definitely be purchasing one if and only if it comes with a pen with at least as good precision as those of Wacom.
Score: 16 Votes (Like | Disagree)

Is apple basically doing what it did last time without Steve Jobs? Where they just kept adding models of computers?

Yes. Yes they are. Focusing on a few products, and making them REALLY good, is what helped Apple come back from a very bleak place. And they are getting further and further away from that philosophy, it seems. Hopefully, history won't repeat itself.
Score: 10 Votes (Like | Disagree)

I do love that all of the displays of this still show 4 icons at the bottom.

For me, a tablet must:
1. Have a stylus. I haven't used my fingers to draw stuff since I lived in a cave, back around 200,000 years ago. The pen/stylus is one of those inventions that has stood the test of time. Even those "sign with your finger as a pen" POS terminals are obtuse.
2. Have a better OS, like OS X. I don't want to be playing around with a 12" iPhone.
3. Allow a mouse/trackpad. When drawing with a CAD program, that whole "hand" thing gets in the way while I am drawing.
4. Allow windows. To me, a single/dual app model is like working in a book, where only one/two pages can be displayed. Having multiple windows is the way to do it, so I can collect ideas from all over, and arrange them my way. Not that my way is the best for you, but it is the best for me.

Um, buy a Surface Pro 3 with Windows 10. Freaking amazing and will do anything/everything you'd ever want to try and accomplish. This iPad "Pro" crap is just dumb. It's not going to be innovative at all...just another money-grab from Apple.
Score: 9 Votes (Like | Disagree)

Is apple basically doing what it did last time without Steve Jobs? Where they just kept adding models of computers?

They're still a long way from "product name" followed by 3 or 4 digit cryptic number, times 10. This is just continuing what they've been doing when Steve was around, making different sized rectangular touch screen devices :)

Also I find your signature to be a bit ironic considering your comment ;)
Score: 8 Votes (Like | Disagree)
Read All Comments