Wednesday August 12, 2015 5:18 pm PDT by Mitchel Broussard
Apple yesterday began contacting some customers who recently purchased third-generation Apple TVs, informing them that their devices had shipped with an unspecified faulty part and offering an exchange for a brand-new unit shipped from the company.

Unlike some other repair or recall programs, Apple has not posted a public advisory about the issue, suggesting it is a small batch of affected units. As a result, the company is proactively reaching out to owners of the devices known to be defective and offering an exchange. Our defective Apple TV was purchased just a few weeks ago, and other affected customers are likely to have purchased their devices in a similar timeframe. 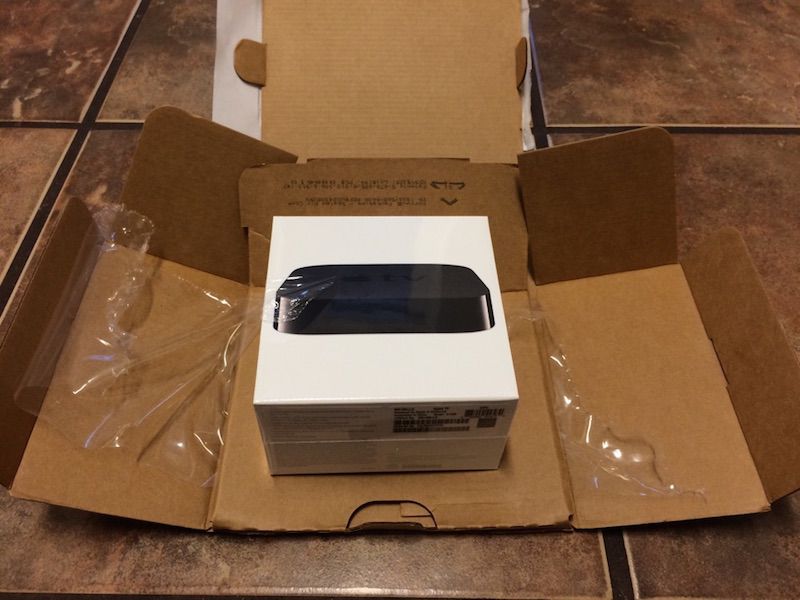 I understand the concern, Apple typically does not reach out to customers proactively this way.

I just need you to confirm that you have this device and to make sure I have the right shipping address (i see that below). I will then send you a new apple tv, we will email FedEx labels to send back the old one then once we get the old one, we will send you an iTunes gift card for the troubles.

Some users receiving emails from Apple may not have experienced any issues with their Apple TVs, as workers at the Help Desk have noted the company is taking preventative measures in identifying devices with the faulty part before any problems may arise.

Because Apple is contacting affected users individually and has not posted an information page on the Apple TV issue, it's likely that only a very small number of people purchased a faulty Apple TV. Readers do not need to worry whether their Apple TVs are defective, as anyone with a bad device will be contacted directly by Apple. Those who have been contacted, however, should be reassured that this is a legitimate replacement program initiated by Apple.

seamer
Customer service done right - send the replacement before getting the faulty one back. Customer doesn't lose anything, and even gains a few $ on the gift card.

Apple didn't design this workflow, but it sure beats how much crud you have to go through when dealing with the likes of Asus.
Rating: 13 Votes

My first thought also. They seem to be so anxious to get these units back pronto. Don't recall Apple ever having been this proactive with a recall. Did any purchasers actually report having a problem?


More likely the faulty part may cause overheating or possibly an electrical shock. I don’t believe in conspiracy theories.
Rating: 9 Votes

Izauze
Someone should do a teardown of one of these "faulty" Apple TV's. Is it faulty like "oops, you now have an A9 chip and 128GB storage, can we have that back quick?"
Rating: 9 Votes

keysofanxiety
Cue inappropriate use of gif.

Apple yesterday began contacting some customers who recently purchased third-generation Apple TVs, informing them that their devices had shipped with an unspecified faulty part

IMO, anybody who uses the Apple TV without a case deserves this. Moonlight
Anyone suspicious that maybe there is something IN the Apple TV that Apple doesn't want us to see? We need to tear down, fix-it style, one of these "faulty" apple tvs to see what is really going on inside.
Rating: 7 Votes

iTom17
You've got to admit: no other company comes even close to this kind of service. Way to go Apple! :)
Rating: 6 Votes

Robert.Walter
I wish Apple had been so pro-active regarding other recalls.

I have an Apple TV that has suffered from intermittent connectivity issues since new. I only happened to stumble upon a secret recall for devices with this issue (within who's s/n range was my unit) ... Unfortunately, I became aware of this hidden recall after my unit was out of warranty and Apple refused to replace it.

This was a surprising disappointment for me.

Similarly, Apple had a major recall (excessive temp risk) on the 5W charger for the iPhone. In this case, Apple will replace it long out of warranty, but (if I am representative with my menagerie of eligible devices) even for customers that have their devices, and contact info, registered on the Apple Support Profile page (not to mention nearly every AppleID being the owner's active email address) Apple has made no apparent effort to reach-out to those customers and inform them of the open recall status affecting their products.

Apple needs to do better here. (It would raise the costs of quality and warranty, but send an unimpeachably strong pro-customer safety & service message.)

I wish Apple had been so pro-active regarding other recalls.

I have an Apple TV that has suffered from intermittent connectivity issues since new. I only happened to stumble upon a secret recall for devices with this issue (within who's s/n range was my unit) ... Unfortunately, I became aware of this hidden recall after my unit was out of warranty and Apple refused to replace it.

This was a surprising disappointment for me.
[…]
Apple needs to do better here. (It would raise the costs of quality and warranty, but send an unimpeachably strong pro-customer safety & service message.)


Totally, heartily agree. My last Macbook started complaining about the battery needing servicing, even though it had less than 60 cycles; Apple said that they would not touch it since it had more than 50 cycles. I insisted to have something done to it, since a previous Macbook got a bulging battery which ended up pushing against the board and broke the fan; Apple still refused, but said not to worry about the battery because they don't bulge any more.

Soon that same Macbook started panicking once a day because of its (Nvidia) GPU; Apple said that there HAD been some recalling, but no longer and they would not do anything to it.

And then of course the battery started bulging and ended up disabling the trackpad. I had to take it out myself - after buying the required trilobe screwdrivers, of course.

The "funniest" thing is that the GPU crashes don't happen if I use Linux (I'm guessing Linux is either using the integrated Intel GPU, or using the Nvidia one somehow differently). So I am having to sell that MacBook as a Linux machine or for parts, because it is plainly unusable with Mac OS X.

I'm still deciding what next computer I will buy. Apple hardware no longer is a guarantee… and Linux is looking better than ever.
Rating: 3 Votes

farewelwilliams
replace it right before the new one gets announced.
Rating: 3 Votes