Apple Pay today expanded its participating issuers list within the United Kingdom, adding support for both HSBC and First Direct customers. Both banks were announced as starting partners for the UK branch of Apple Pay, but were delayed until late July at the last minute. 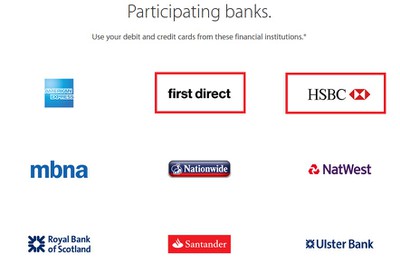 HSBC and First Direct join a list of UK Apple Pay partners that includes: American Express, MBNA, Nationwide, NatWest, Royal Bank of Scotland, Santander and Ulster Bank. Still listed as coming soon are: Bank of Scotland, Lloyds Bank, M&S Bank and TSB. Although Barclays has confirmed "imminent" support for the contactless payment service, the bank has yet to be listed on Apple's Apple Pay UK site.

Along with the announcement of HSBC and First Direct support, customers using Apple Pay in the UK will also be able to start taking advantage of the service at both Five Guys restaurants and Wilko stores across the country. UK support of Apple Pay launched on July 14, and has been steadily expanding its roster of retail partners and financial institutions in the subsequent weeks.

It's not very clever, by the time I find my phone, press my finger on the phone and get it to read correctly I would have been out of the shop if I just used my contactless card. No point!

Find your phone? Where the heck are you keeping your phone that it is harder to find than your wallet?
Score: 12 Votes (Like | Disagree)

Honestly it's ridiculous Apple are rolling out Apple Pay to one country nearly every year. Australia has a much denser ratio of NFC enabled card readers than both the UK and USA, yet Apple haven't mentioned anything yet. Tired of waiting.

Considering Apple Pay launched 9 months ago, I think it's difficult to describe it as 1 country per year, or what Apple wants to do 1 country per year. Anyway, in Canada we're in the same situation. We've been surrounded by tap to pay for many years, feels like it would be an easy rollout here too. If anything I'd guess that the banks are the major hold up, just from seeing how they adopt and adapt to new technology.
Score: 7 Votes (Like | Disagree)

You must not live in the U.S. then.

It is a thread about Apple Pay in the UK. :D
Score: 5 Votes (Like | Disagree)

Honestly it's ridiculous Apple are rolling out Apple Pay to one country nearly every year. Australia has a much denser ratio of NFC enabled card readers than both the UK and USA, yet Apple haven't mentioned anything yet. Tired of waiting.

You do realise that Apple can't just roll out Apple Pay in any given country without the co-operation of the banks and retailers who operate in that country?

No doubt Apple is in negotiations regarding dozens of countries behind the scenes, but every bank has their own polices and timescales for adopting new services. There are also banking regulations in each country that have to be adhered to. Apple rarely publicises anything about such negotiations until they're ready to launch.

If you're tired of waiting, move to the US or UK, or hassle the banks in your country.
Score: 4 Votes (Like | Disagree)