As it works on introducing some major changes to the third-party accessory sections of its retail stores, Apple has launched a new section in its online store dedicated to "Apple Tested Cases."

The new page is displayed alongside third-party iPhone and iPad cases and outlines the testing procedures for Apple-approved Made for iPhone/iPad (MFi) third-party cases that Apple sells both online and in its retail stores. Designed to reassure customers about the quality of the third-party accessories available from Apple, the site goes over several testing parameters that cases must meet, including design, camera, acoustics, sensors, and cellular and wireless. 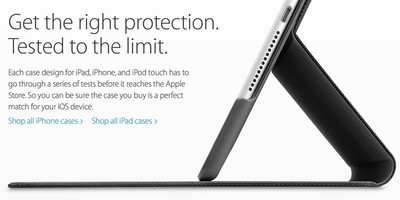 We analyze how a case fits, so you can still access every button, port, and jack. And a series of drop tests tells us the design is strong enough for day-to-day use.

Each case must fit the iPhone or iPad exactly, leaving all ports and features accessible. The camera and flash must be unobstructed, cases can't interfere with FaceTime, phone calls, or audio sound, and sensors for ambient light and Touch ID must work the same with the case on and off. Cellular, Wi-Fi, and NFC connectivity are also tested, with each case needing to meet Apple's standards for signal quality.

Apple has long engaged in these testing procedures to make sure accessories are compliant with its MFi programs, but the launch of the "Apple Tested Cases" page marks the first time that Apple's prominently shared its testing guidelines with the public.

The introduction of the page comes as Apple prepares to revamp the third-party accessory sections in many of its retail locations, cutting down on the number of accessories offered and packaging many of them in boxes that were co-designed by Apple to match the packaging of its own products.

What better way to part fools from their money?
Score: 3 Votes (Like | Disagree)

Dilster3k
This is rather pointless? Who in their right mind sells cases that don't actually properly fit the product?

In other news... My Apple Leather case in blue for my iPhone 6 Plus has been holding up quite terribly these last few months.
Score: 2 Votes (Like | Disagree)

So? What counts is now, not the past, otherwise we'd still be complaining about Apple Maps.

What counts is now? How many releases did it take for iOS 7 to be solid? By your logic when iOS 8 limped to release the past didn't matter. And then iOS 8 was shot out and it's taken 9 months to get it straight. Apple will push this same BS again. History tells us even if you want to shut your ears that it will take months to get iOS 9 to become solid.
Score: 2 Votes (Like | Disagree)

I hope they remember to test the cases for compatibility with the camera flash. I've had to ditch a couple of cases for older iPhones in the past because when I tried to use the camera flash, the case amplified the flash and caused the photo to be a white blurry mess. I've stuck to black iPhone cases since then. Boring for me. But they work with the flash fine.

Me too. Some of these lower quality cases I have seen were done without any optical review of the case. I've even seen cases with a reflective surface reflect light into the camera lens leading to a lot of optical noise.

Never underestimate how cheap some of these case manufactures can be knocking off a product without any experienced engineering in their development loop. Some are using engineering undergraduates that have yet to finish their degree.
Score: 1 Votes (Like | Disagree)
Read All Comments