It has not been a good week for Apple's developer services. Less than a day after iTunes Connect experienced a lengthy outage that lasted several hours, TestFlight is now unavailable for many developers. The beta testing service for iPhone, iPad and Apple Watch apps has been returning a "currently unavailable" message since as early as Wednesday afternoon around 6:00 PM Pacific. 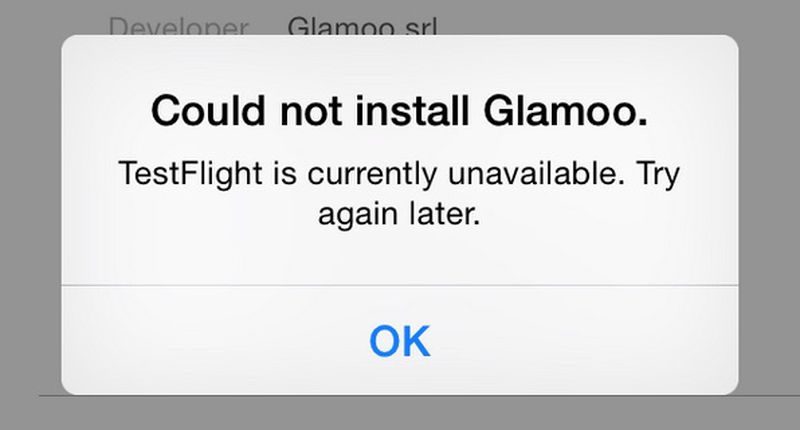 Apple has yet to update its system status page for developers to reflect the outage, although the company has historically been rather delayed at doing so. The outage has been confirmed to be affecting developers in the United States, Canada and Europe, and likely elsewhere, preventing developers from seeding pre-release versions of their apps for testing for the meantime.
Tags: TestFlight, iTunes Connect, system status
[ 19 comments ]

The problem isn't Apple's services... it's that minor service issues get reported, while companies that have consistent issues, like Netflix, don't. Leading people to believe that Apple's services are terrible, when they aren't.

Hey, look over there. Netflix has problems too.

/sweeps Apple issue under the rug:rolleyes:;)

But seriously, Apple is strong in a lot of areas. Services isn't one. Pointing at other companies doesn't change that.

Besides Netflix is just consumption. Theses services are used for work. A little difference in consequence.
Score: 9 Votes (Like | Disagree)

No, context is important. Saying Apple has problems with services implies that Apple is the only one. Look at most other services - they have problems too, most of them FAR WORSE than Apple's problems. Thus, Apple is BETTER, and has reliable services compared to others.


Context is important. Compare TestFlight now to TestFlight before Apple bought it.

Apple do many things right. TestFlight isn't one of them.
Score: 6 Votes (Like | Disagree)

No, context is important. Saying Apple has problems with services implies that Apple is the only one. Look at most other services - (A)they have problems too, (B)most of them FAR WORSE than Apple's problems. (C)Thus, Apple is BETTER, and has reliable services compared to others.


Here's the problem though. When addressing an issue it's far better to address it in a straight forward manor instead of using a straw man argument. Bolded: What you did there. That's a fallacy in logic. A+B =/= C. A is true. Other companies do have problems. B you made up to support your argument. Who's the arbiter of far worse, you?:rolleyes: C can't be concluded from your argument. That's not how valid conclusions are reached.

You're right, context is important. Conveniently, you overlooked the context of the original poster's quote. That quote was about Apple's services; period. Not about how other services have issues so Apple's issues should be viewed in a different light. If you can't address the issue without referencing another company, your argument may not be as strong as you'd like.
Score: 4 Votes (Like | Disagree)

Gotta say whoever is heading up their developer services division should "reassigned" -- get someone in there who can manage things better.

MSFT went downhill because they didn't care about their developer community I would hate to see Apple follow that route.

The number of bugs in their code and lack of response for paid TSI's is disappointing.

A bug bounty would be nice -- I spend my time finding a bug for you the least you could do is credit me back my TSI -- seriously WTF?!
Score: 3 Votes (Like | Disagree)

Rafterman
What the F is a "glamoo"?
Score: 2 Votes (Like | Disagree)
Read All Comments