Over the course of the last several weeks, Apple has been hiring new employees for its upcoming Apple Store in São Paulo, Brazil, and as of this week, barriers decorated with Apple logos have gone up around the store, suggesting the store's official launch is growing closer.

Shared by Brazilian site Blog do iPhone [Google Translate], the barricades feature an Apple logo surrounded by dots in varying sizes in silver, gold, and space gray, the colors of the iPhone, the iPad, and the upcoming MacBook. 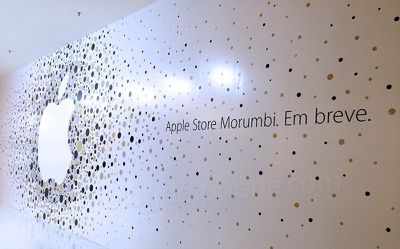 The words on the walls read "Apple Store Morumbi. Em Breve," which translates to "Coming soon," and another section reads "Entre nessa festa," roughly translating to "Enter this party."

The São Paulo store is something of a big deal for Apple, because it's only the second store in the country and the first in the metropolis, which is Brazil's most populous city. The first Apple Store in Brazil was opened in Rio de Janeiro in February of 2014.

Apple has a bit of a tough time selling its products in Brazil because the prices are much higher than in other countries. Because of taxes and tariffs on imported goods, the entry level iPhone 6 is priced at R$ 3.499 in the country, equivalent to $1,100 in U.S. dollars, and $450 higher than the price in the United States.

When the Rio store opened, there were 20 days between the time when the barricades went up and launch took place, so if the São Paulo store follows a similar timeline, it could open in late April or early May.

But still overly expensive to buy anything. Cheaper fly to USA and go shopping.


All countries try to promote locally made goods, but the tariffs are a bit crazy for popular international brands.

I regularly see Brazilians visiting the US do a LOT of shopping to take back home. Even bicycles! :D
Score: 1 Votes (Like | Disagree)

gugy
Prices for imported products in Brazil are a joke. Mostly due taxes.
I used for many years took my used iPhones and iPads to sell down there and would get the same amount of a new in the USA. Prices for new ones were almost triple to what you can find in the US.
Now it is harder to do that because the dollar is higher and also some of taxation lowered. But still overly expensive to buy anything. Cheaper fly to USA and go shopping.
Score: 1 Votes (Like | Disagree)
Read All Comments