'Launcher' Returns to the App Store After Apple Relaxes Policies

Back when iOS 8 first launched, Launcher was one of the first apps to take advantage of the new widgets allowed in the Notification Center, and it introduced shortcut functionality that let users launch an app or complete a task like calling a specific person with a single tap.

Apple approved the app and allowed it to exist in the App Store for over a week, but then the company made the decision to remove Launcher from the App Store, calling it a "misuse" of widgets. Since then, Apple has gone on to make a series of questionable decisions about widgets, banning apps for similar widget offenses and then later changing its mind.

Up until now, Apple has not reversed course on Launcher, but that didn't stop Launcher developer Greg Gardner from continually resubmitting different variations of the app in the hopes of creating something Apple would find acceptable. 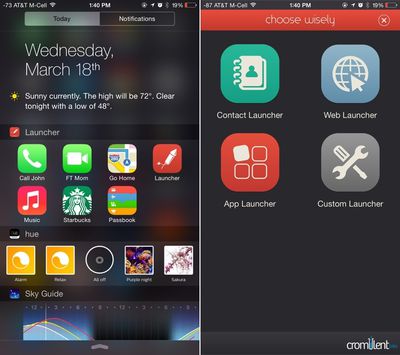 Earlier this month, a limited version of Launcher gained App Store approval (a version with only calling, emailing, messaging, and FaceTime access), and when Gardner asked for clarification on why that was acceptable when his original app was not, Apple reviewers opted to revisit the first Launcher app and stated that its functionality was now acceptable.

According to Gardner, he did not have to remove any of the original Launcher features to get it re-approved in the App Store. Apple reportedly told him that when a new feature first launches, they are conservative about what they allow, but restrictions sometimes relax over time. "That is what appears to have happened in this case," Gardner told MacRumors.

Due to Apple's decision reversal, Launcher will be available for download again beginning today. It's already propagating in some countries, and will be in the U.S. App Store tonight.

Launcher has retained all of its original functionality, which means users can download the app and use it to set up shortcuts that will appear in the Today view of the Notification Center. Available shortcuts are organized into four sections: Contact Launcher, Web Launcher, App Launcher, and Custom Launcher.

With the Contact Launcher, it's possible to create shortcuts to call someone, email someone, FaceTime someone, get directions to a specific place, Message someone, and more. The Web Launcher sets up shortcuts that will automatically launch a specified URL, and the App Launcher lets users open a specified app and works with both Apple apps and third-party apps. The Custom feature lets users create buttons for any installed apps and any other URL schemes.

Launcher also offers a few new features, including a much-requested option to make the icons smaller and hide labels for a more compact look within the Notification Center.

Launcher can be downloaded from the App Store for free, and the pro version is available as a $3.99 in-app purchase. The app is still rolling out to App Stores so it may take a short while before it is widely available to everyone. [Direct Link]

If this is really permanent, and the take down is not temporary, I'll say goodbye to my Nexus 5 Android.


Seriously? You'd change phones and platforms over this? Okay.
Score: 15 Votes (Like | Disagree)

ipedro
I hope iOS 9 introduces a Dashboard. These widgets make absolutely no sense in the Notifications pull down. Dashboard would be great to the left of the first Home screen (where Search used to be).
Score: 11 Votes (Like | Disagree)

b166er
"Item is no longer available"
Score: 8 Votes (Like | Disagree)
Read All Comments

Saturday February 4, 2023 10:05 am PST by Eric Slivka
Online retailer TigerDirect has slashed pricing on the M1 iPad Air in several colors, offering the base 64GB configuration for just $313.99 in Purple and Pink. Note: MacRumors is an affiliate partner with TigerDirect. When you click a link and make a purchase, we may receive a small payment, which helps us keep the site running. That's a savings of 48% compared to Apple's normal $599.00...
Read Full Article • 418 comments