Samsung at Mobile World Congress on Sunday announced its latest flagship smartphones, the Galaxy S6 and Galaxy S6 Edge, each compatible with a new mobile payments service called Samsung Pay. The smartphones are a significant refresh to the Galaxy lineup, featuring a slimmer and lighter metal and glass design, all-new front and rear cameras, improved hardware specifications under the hood and more. 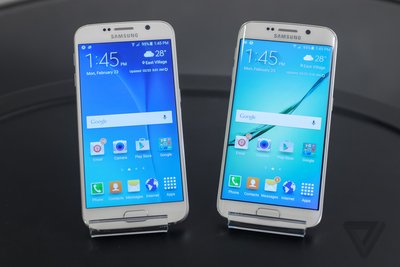 Samsung Galaxy S6 and Galaxy S6 Edge (via The Verge)
The Galaxy S6 Edge is notable in that it is the first smartphone to feature a curved display on both sides of the device, constructed from Gorilla Glass 4. Both smartphones have 16-megapixel rear-facing cameras and 5-megapixel front-facing cameras with f/1.9 lenses for improved low-light photos, Auto HDR, optical image stabilization, IR white balance and a "Quick Launch" feature for accessing the camera from any screen in less than one second.


Notably absent from the Galaxy S6 and Galaxy S6 Edge is a MicroSD slot for expandable storage, waterproofing and a removable battery, three features that Samsung often promoted over the iPhone in the past. The smartphones do gain a feature that the iPhone does not have in wireless charging with support for WPC and PMA standards, allowing you to charge the device at Starbucks or using Qi-enabled chargers.

Samsung introduced a new fingerprint scanner on the Galaxy S6 and Galaxy S6 Edge, to be used for Samsung Pay, that functions like Touch ID on iPhone by no longer requiring swiping. Samsung Pay will be available this summer and rival Apple Pay with NFC and magnetic secure transmission (MST) technologies that make the service compatible with both NFC-enabled payment terminals and older magnetic swipe readers.

The Galaxy S6 and Galaxy S6 Edge will be available April 10 across several countries worldwide in White Pearl, Black Sapphire, and Gold Platinum color options. A special Blue Topaz edition will be exclusive to the Galaxy S6. The smartphones will be available on AT&T, Verizon, Sprint and T-Mobile in the U.S., and will also be on sale through Amazon, Best Buy, Costco, Target, Walmart and Sam's Club.

ideal.dreams
Samsung Pay, are you kidding me?
Score: 161 Votes (Like | Disagree)

Mobile payments...you get the idea.

So they mock Apple, then do a u-turn and blatantly copy them.
Score: 150 Votes (Like | Disagree)

Mlrollin91
Let me get something straight. Samsung criticized Apple about the iPhone 6/6+ saying welcome to 2012. The S6 is made with a front and back glass design with an aluminum frame, no longer has expandable storage, moved the speaker from the back to the bottom and is no longer water resistant. So it's a larger iPhone 4/4S. Good job Samsung, welcome to 2010.
Score: 105 Votes (Like | Disagree)

Monday January 24, 2022 9:20 am PST by Juli Clover
AT&T today announced the launch of upgraded AT&T Fiber plans, which support speeds of up to 5 Gigabits for some customers. There are two separate plans, one "2 GIG" plan and one "5 GIG" plan, available to new and existing AT&T Fiber subscribers. According to AT&T, the new plans are available to nearly 5.2 million customers across 70 metro areas including Los Angeles, Atlanta, Chicago, San...
Read Full Article • 257 comments