A number of iTunes Connect developers have turned to Twitter and tipped us off about an ongoing issue where users are being shown someone else's session after attempting to login into their own account. Instead of seeing their own apps, iTunes Connect is mismatching users and displaying other apps from completely different developers. MacRumors has been able to duplicate this issue, which appears to be widespread and has been going on since at least 8 AM Pacific. 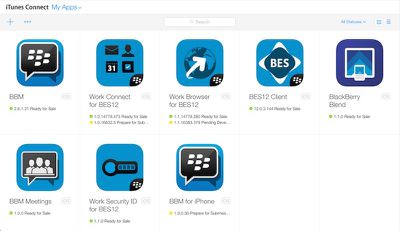 Most definitely was auto logged in to a blackberry account on iTunes connect somehow... This isn't mine! pic.twitter.com/S9lujDno95 — Bay Phillips (@bayphillips) January 29, 2015

While other developers' apps are displayed in the iTunes Connect dashboard, attempting to take further action results in an "unable to process request" error and a redirect to the proper account. Sales and payment information does not appear to be accessible for the mismatched account. For some other users, iTunes Connect also appears to be experiencing issues with logging in.

Apple has yet to comment on the matter, and this post will be updated as further details become known.

Update 8:50 AM PT: iTunes Connect is now listed as unavailable.

Update 10:03 AM: Apple has now acknowledged on its System Status page for developers that users are "experiencing a problem" with iTunes Connect. No estimate of a timeframe for resolution has been given.

Update 10:13 AM: Apple is also acknowledging that its TestFlight beta services are also being affected, with users "unable to submit new apps and invite new testers."

Update 12:31 PM: It appears that iTunes Connect is back online.

Update 12:43 PM: Apple is now reporting on its System Status page that iTunes Connect and TestFlight services have indeed been restored.

PowerBook-G5
Time to flip the switch to "off" at Apple. This is a serious security concern.
Score: 16 Votes (Like | Disagree)

markcres
Instead of hoarding billions of dollars, they should spend some of it fixing their products and services.
Score: 13 Votes (Like | Disagree)

Mark Booth
Dear Apple: You frequently suck at anything to do with cloud services. Terrific hardware and great software, but cloud services suck all too often. Time to hire some better people in that regard.

Wednesday June 29, 2022 5:23 pm PDT by Sami Fathi
The redesigned MacBook Air with the all-new M2 Apple silicon chip will be available for customers starting Friday, July 15, MacRumors has learned from a retail source. The new MacBook Air was announced and previewed during WWDC earlier this month, with Apple stating availability will begin in July. The MacBook Air features a redesigned body that is thinner and lighter than the previous...
Read Full Article • 321 comments