At CES 2015, Antenna79 announced a new brand of cases called Reach79 , which claims to boosts signal strength and performance up to two times for iPhone 6 and 6 Plus.

“We all want to get the most from our smartphones, and that’s exactly what Reach79 cases were designed to do,” said David Vigil, CEO, Antenna79. “Powered by patented antenna technology, Reach79 cases are the first performance-enhancing smartphone cases designed for speed. Each case is embedded with a micro-thin, gold-plated antenna that works to increase your smartphone’s signal strength so your phone can do more for you.”

Reach79 says that the stronger signal strength provided by its cases can improve battery life as the phone wouldn't have to work as hard to pick up a signal. Additionally, the company says it improves user experience with less dropped calls and faster download speeds and greater signal coverage. The cases also come with military grade drop protection.

However, the company does warn that user experience also depends on device, carrier and location.

The Reach79 cases can be purchased starting today at the company's website. The iPhone 6 case is priced at $59.99 while the iPhone 6 Plus version is priced at $69.99. The cases currently come in black only, but Reach79 says additional colors are on the way in the first quarter of 2015.

Jmacman78
Reminds me of this from back in the day: 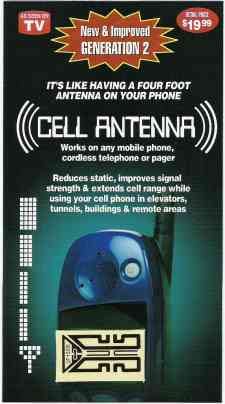 You can NOT increase signal strength passively. You may be able to focus signal from a larger area to a smaller area but the shapes required are not present in this product.

Here's the tell: Nowhere on their web site do they talk about an average db increase of signal or S/N ratio.
Want further proof: look around in Amazon for any of the other snake-oil stick-on antenna boosters. Notice they almost all have 2 star reviews. Why? they don't work. They can't work.

XboxMySocks
What a load of crap.
Score: 26 Votes (Like | Disagree)

Kabeyun
I'm going to do something really unusual these days, and around here. I'll refrain from judging until I've either had experience with it or have evaluated others', lest I end up with foot-in-mouth disease.
Score: 23 Votes (Like | Disagree)

It's one thing to keep an open mind -- but it's another to understand some basic science and realize that this product CAN'T work as claimed.

For starters, you can't improve on an antenna's reception of a signal by placing other objects (metallic or not) next to it. They'd have to physically touch it, which is not possible with this case.

Think about the old fashioned "rabbit ears" antennas for a TV set or an antenna for an FM radio. Did you *ever* see somebody successfully get a better signal by stacking some empty beer or soda cans beside it? Nope. What *sometimes* helped was changing the antenna's shape or length by wrapping some aluminum foil around it -- but that involved it physically touching the antenna.

And secondly, there are certain optimal configurations for antennas based on which frequencies they're supposed to receive. This is where someone like a HAM radio enthusiast could go into much more detail than I can. But I remember from tinkering with CB radios, years and years ago ... there were what they called "full wave", "half wave" and "quarter wave" antennas sold for them. The idea was, the length had to match up with the size of one of the radio waves to get optimal CB reception - but alternately, you could go with shorter lengths too, as long as they were exactly 1/2 or 1/4th the length of the optimal "full wave" antenna's length. Anything else was less than ideal.

I'm sure with all the research Apple did, they already chose antenna configurations for the iPhone 6 which are the proper length and placement in the phone to receive the intended cellular frequencies. Adding more metal with a snap-on case isn't going to make it come closer to ideal, even IF it could magically make a physical connection with the internal antennas.


Actually, I still use rabbit ear antennas. And I live in a weak signal area for both cell phones and televisions.

You do not have to have physical contact with an antenna to improve its signal. Otherwise my reception wouldn't improve when I actually enter the room with the antenna. Reception also changes depending on how I sit in the chair. Some channels come in better when I place my arms and legs certain ways despite not being next to the antenna.

It's weird, but true.

And yes there is foil on the antenna posts that I've shaped a certain way. I've also noticed that my reception will also improve when my neighbor comes home and parks their car outside my window. When their car is here, I can get channels that won't come in at all otherwise. It's annoying when my neighbor leaves in the middle of a good show.

So obviously placing things somewhere in proximity will help.

I've also used the antenna stickers for cell phone reception that others say don't work. With my reception, I had nothing to lose.

I haven't used them on every phone I've had, but I have used them on 3 phones. Those particular phones always dropped calls and never worked at my house. The reception was so terrible that if the phone did manage to ring when someone called, it would drop the call by the time you said hello.

After placing the stickers inside the phone's battery compartment, the phones were suddenly reliable and never dropped calls again.

I've used them on a flip phone, a HTC windows phone, and a HTC Android phone.

Sure I was skeptical. But when you have something that won't work, what have you got to lose by trying? $7 wasn't much of a gamble on a sticker.

So, I'll reserve judgement on this new case until after it is released and publicly tested.

Just like the stickers had mixed results depending on the user, the phone, the service provider, and the geographic area, these cases will likely help some people.
Score: 15 Votes (Like | Disagree)

So...anyone at CES have the wherewithal to put their phone in field test mode and pop it in the case rather than take their BS at face value? Let me guess, the show floor is a suboptimal location for their ideal user experience?

I've seen a couple of informal tests (no numbers) that claim it did help. I'm sure we'll get more scientific results soon.

Regarding the signal claims, I spent roughly a week with the case on my iPhone 6. I kept an eye on the device in my apartment, where AT&T coverage doesn’t go above 3 dots (out of 5). To my surprise, the iPhone 6 maintained 4 dots of signal on a regular basis.

While I was initially a bit skeptical, the case has really won me over and become my every day case. I found that I was able to get great reception in places where my friends were not. Even though we were on the same carrier, with the same phone, I was getting a great signal in places where they barely had one bar.

You're welcome to post to this thread about the product - either positive or negative, whether you believe it or not. But if you want to talk about site policies, or unsubstantiated claims about the site being paid off, this is not the thread for it.