Algoriddim has long been known for its popular DJ app djay, which began life on the Mac before moving to the iPad, iPhone and most recently Android, with the various versions winning a number of awards and contributing to making djay the world's best-selling DJ app with over 15 million downloads.

With djay having proven popular among both amateur and professional DJs, users have been asking for more from the software, and Algoriddim is delivering that today with the release of djay Pro for Mac. Going well beyond the previous version of djay for Mac, djay Pro takes advantage of Apple's latest hardware and software improvements to support 64-bit processing, 60 frames-per-second graphics rendering, up to four decks, seamless integration with dozens of MIDI controllers, and a variety of audio effects.


On the library side, djay Pro offers an all-new music library with inline search, instant preview, and song recommendations powered by The Echo Nest, as well as easy integration of iTunes libraries and, for the first time on desktop, Spotify playlists. Users can easily drag and drop tracks from iTunes and Spotify libraries, not only from within djay Pro but also from iTunes and Spotify Mac apps. 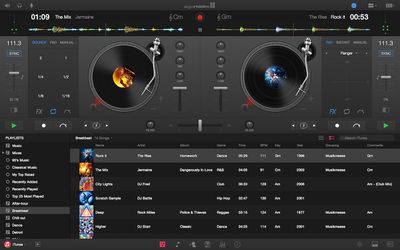 Turntable view
In our testing, djay Pro performed extremely well, with high-quality turntable and waveform graphics making for a pleasing user experience. And while djay Pro adds a number of new effects and other tools compared to the previous version, the app's thoughtful and intuitive layout makes it easy both for experts to dive right in and for beginners to keep things simple at first before growing into djay Pro's full capabilities.

A customizable layout allows users to choose from several modes dividing the app window between music library/queueing and the turntables or waveforms, and the library portion of the window can be easily toggled between light and dark views to match user preference for various environments. Users of both Mac and iOS versions of djay will also find their cue points, beat grid edits, meta data synced between the apps via iCloud.

Horizontal waveform view with four decks
All of the new features included in djay Pro do come at a price, however, with Algoriddim electing to offer the new app at an introductory price of $49.99 and an eventual regular price of $79.99, a significant increase over the $19.99 standard pricing of the previous version. But with djay Pro aimed in large part at serious DJs looking for the most powerful tools for Mac, Algoriddim believes djay Pro still offers a very solid value compared to traditional DJ setups.

The base package includes a set of five "Essentials" audio effects such as Echo and Flanger, and a one-time $9.99 in-app purchase adds 34 more effects from Sugar Bytes for use across all of the user's Mac and iOS versions of djay.

djay Pro is launching today via the Mac App Store [Direct Link] and replaces the original version of djay for Mac, which will no longer be available. djay Pro requires a minimum of OS X 10.9 Mavericks, and a Spotify Premium subscription is required to access the Spotify catalog from within the app. A free seven-day trial of Spotify Premium is available for djay Pro users to test out the service and integration.

I'm happy that it is finally updated, but definitely not happy that I have to be charged again.


Heaven forbid you pay for something that people took their time, energy and livelihood to create.
Score: 2 Votes (Like | Disagree)

I'm not a DJ, but the UI looks so lickable that I'm slightly tempted to buy it just to play with.
Score: 2 Votes (Like | Disagree)

djtech42
I'm happy that it is finally updated, but definitely not happy that I have to be charged again.
Score: 1 Votes (Like | Disagree)
Read All Comments