Apple's newly introduced payment initiative Apple Pay is currently only available in the United States, but the company has said that it is "working hard" to bring the feature to additional countries.

A new job listing for an Apple Pay Intern (via iClarified) seemingly confirms Apple's efforts to expand its payments service, stating that Apple Pay is "set to expand across Europe, Middle East, India, and Africa."

According to the job posting, the Apple Pay intern will join a London-based Apple Pay team that will facilitate the rollout of Apple pay to various countries by working with "Issuers, payment networks and merchants across Europe." 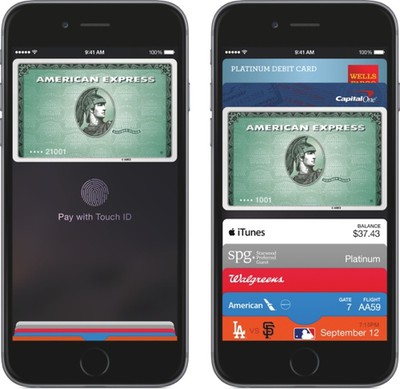 Apple Pay is a new and exciting area in Apple that is set to expand across Europe, Middle East, India and Africa. Apple Pay will change the way consumers pay with breakthrough contactless payment technology and unique security features built right into their iPhone 6 or Apple Watch to pay in an easy, secure, and private way. The new London-based Apple Pay team will work to drive the roll-out of this technology across EMEIA by working with a variety of internal and external partners, including teams in the US where the product will first launch and the EMEIA organisation, as well as Issuers, payment networks and merchants across Europe.

While a timeline for a possible Apple Pay release in additional countries is unclear, Visa has previously said that it is working with Apple to roll out Apple Pay across Europe in 2015. Alibaba is also said to be in talks with Apple over a potential partnership to provide a payments solution for China.

Though limited to U.S. credit cards, Apple Pay already works in other countries at NFC-supported point-of-sale systems, so once banks sign on, an expansion of the program into international countries may be a relatively simple process for Apple.

Update: Apple has removed the job listing from its site.

Seandroid
Canada will probably get this when we get iTunes Radio, in spite of basically every pin pad having NFC.

"set to expand across Europe, Middle East, India, and Africa."


But not Canada. Once again Apple ignores their closest neighbours.
:mad:
Score: 6 Votes (Like | Disagree)

James Manesh
Apple Pay should be available in Canada in 2015. Hopefully sooner than later.
Score: 5 Votes (Like | Disagree)

That said, if you're thinking about those "tap" terminals for your cards there are two camps VISA and MC. Each terminal can only take one type of the credit cards but not the other. But yeah your argument is true, we're only 35 million+ which is about the size of a city or two in countries like India, China, etc. etc.


This is completely untrue.

There is Visa PayWave, MasterCard PayPass and Interac Flash
All NFC hardware will support any of these.

Source: I work with Chase Paymentech and am very familiar with the hardware and its capabilities.
Score: 4 Votes (Like | Disagree)

bigjohn
and once they get to the club cards, I can dispense with a wallet and go money clip!
Score: 4 Votes (Like | Disagree)
Read All Comments