The United States Justice Department has been using fake communications towers installed in airplanes to acquire cellular phone data for tracking down criminals, reports The Wall Street Journal. The program has reportedly been in place since 2007 and uses Cessna airplanes that operate out of "at least five" metropolitan-area airports.

Aircraft in the program out outfitted with "dirtbox" devices produced by Boeing that are designed to mimic cellular towers, fooling cellphones into reporting "unique registration information" to track down "individuals under investigation." According to the WSJ, these devices let investigators gather "identifying information and general location" data from thousands of cellular phones in one flight, and Apple's encryption policies don't prevent the collection of data. 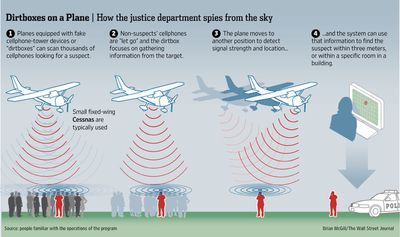 Cellphones are programmed to connect automatically to the strongest cell tower signal. The device being used by the U.S. Marshals Service identifies itself as having the closest, strongest signal, even though it doesn't, and forces all the phones that can detect its signal to send in their unique registration information. Even having encryption on one's phone, such as Apple Co. 's iPhone 6 now includes, doesn't prevent this process.

The technology is aimed at locating cellphones linked to individuals under investigation by the government, including fugitives and drug dealers, but it collects information on cellphones belonging to people who aren't criminal suspects, these people said. They said the device determines which phones belong to suspects and "lets go" of the non-suspect phones.

The fake tower devices are able to interrupt calls on "certain phones," with authorities attempting to minimize harm by ensuring they doesn't interrupt emergency calls, and the technology can pinpoint a suspect's cellphone location down to three meters.

The program is run by the U.S. Marshals Service, and some individuals involved have raised concerns about the legality of the operation and "if there are effective procedures" in place to safeguard the handling of data acquired, as it is said to capture data from thousands of non-criminal individuals as well.

It is not known how often the flights take place as the WSJ's sources did not divulge that information, but they reportedly "take place on a regular basis." Justice Department officials did not confirm or deny the existence of the program when questioned, stating that a discussion of the matter could "allow criminal suspects or foreign powers to determine U.S. surveillance capabilities," but a representative said that Justice Department agencies comply with federal law and seek court approval for their activities.

A Verizon spokesperson said that the company was not aware of such a program and did not participate, while spokespeople from AT&T and Sprint declined to comment.

our enemies don't have borders anymore. if it means capturing the next terrorist and their cell, go for it. I'm not doing anything wrong, so i'm not worried

I'm not doing anything wrong, so i'm not worried

There is probably something you're doing wrong.
Score: 53 Votes (Like | Disagree)

Law enforcement agencies still need to get court warrants before they can conduct this kind of surveillance, so it is not like our constitutional rights are being violated.


I don't see anywhere in the article where a warrant is needed for this. They are not searching your phone for your data, as they are going through an intermediary. If anything, the 4th Amendment wouldn't apply, as all they would need to do is get a subpoena from the phone companies to use their towers. Nothing more.

our enemies don't have borders anymore. if it means capturing the next terrorist and their cell, go for it. I'm not doing anything wrong, so i'm not worried


Martin Niemöller (http://www.ushmm.org/wlc/en/article.php?ModuleId=10007392) was a prominent Protestant pastor who emerged as an outspoken public foe of Adolf Hitler and spent the last seven years of Nazi rule in concentration camps.

He was best known for the following quote:


First they came for the Socialists, and I did not speak out
Because I was not a Socialist.

Then they came for the Jews, and I did not speak out
Because I was not a Jew.

Then they came for meand there was no one left to speak for me.


Just because you aren't doing anything wrong doesn't mean you should be complicit in what is happening. That type of non-action implies that you also condone it.

LucasLand
our enemies don't have borders anymore. if it means capturing the next terrorist and their cell, go for it. I'm not doing anything wrong, so i'm not worried
Score: 31 Votes (Like | Disagree)

I'm not doing anything wrong, so i'm not worried

JeffyTheQuik
I don't trust a government that doesn't trust me with a phone.
Score: 26 Votes (Like | Disagree)
Read All Comments