Ahead of its launch, Yosemite adoption by beta testers and developers was more than 33 times higher than the adoption of Mavericks, and as measured by Chitika, its one percent share of North American Mac OS X-based Web traffic on the first day after release was double the day one adoption rate of Mavericks and Mountain Lion. 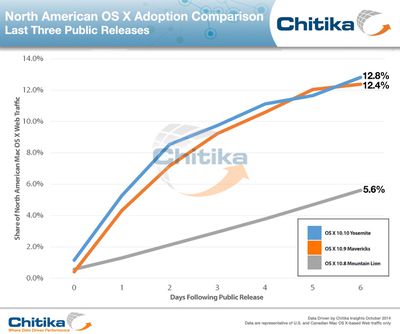 Apple had previously made a public beta of the OS available for the first time in the company's history, and this seems to have helped boost initial adoption rates slightly beyond what was observed for OS X Mavericks back in 2013.

Chitika's numbers are drawn from millions of U.S. and Canadian Mac OS X-based online ad impressions from the Chitika Ad Network. Chitika measured ad impressions from October 16 to October 22 to acquire its data. Similar but somewhat higher numbers are being reported by GoSquared, which offers real-time analytics that measure OS X traffic.

Yosemite installation numbers from GoSquared
According to the site, Yosemite is installed on approximately 16 percent of Macs, though numbers fluctuated up to 10 percent over a seven day period as GoSquared measures real-time visits to more than 50,000 sites.

Yosemite installation rates over the past 7 days, measured by GoSquared
Released on October 16, OS X Yosemite is available from the Mac App Store as a free download. It is compatible with all Macs that were previously able to run Mountain Lion and Mavericks. [Direct Link]
Related Forum: OS X Yosemite
[ 237 comments ]

MrGuder
I'm staying on Mavericks on my 2012 Mac Mini, I like it and frankly I'm afraid to update. I don't need any more problems, the latest iPhone iOS 8 has been enough problems for me. I need some consistency.

I'm still upset that Apple forced iTunes 12 to update on my system automatically, I never wanted to update to 12 and I ticked the box not to update and it did it anyway.
Score: 14 Votes (Like | Disagree)

Broph
Still lower than I think it should be. I can understand though -- my parents don't even know what Mavericks / Yosemite is, and just stay on Mountain Lion (that came with their iMac). No doubt there's a lot of people that are just oblivious to free upgrades, not to mention many users that stay on older versions to remain compatible with specific software.
Score: 14 Votes (Like | Disagree)

For comparison, windows 8 and 8.1 makes up only 12.26% of all PCs. Yosemite outpaced that in less than a week.


Yea that 12.26% is part of a MUCH larger number. That's like there being only two Macs in the world and one had Yosemite installed. Then it would be 50%. Gotta love how they twist the truth.


It's a good OS. I skipped the Lions and went to Mavericks. Still waiting until at least .2 or .3 for Yosemite.
Score: 10 Votes (Like | Disagree)

Yea that 12.26% is part of a MUCH larger number. That's like there being only two Macs in the world and one had Yosemite installed. Then it would be 50%. Gotta love how they twist the truth.

Eh, weak argument. Nearly half a billion iPhones have been sold and more than half of all iPhones are running the latest OS.

And apple's software updates are easy and free, unlike windows.
Score: 7 Votes (Like | Disagree)
Read All Comments