OS X Yosemite: An In-Depth Look at Markup and Mail Drop in the Mail App

Friday October 17, 2014 4:33 pm PDT by Juli Clover
OS X Yosemite has brought some major changes to Apple's Mail app, and those changes aren't limited to a simple visual overhaul. Mail may have a new look, but it also has several new features like Mail Drop and Markup.

With Markup, you can annotate images and PDFs from directly within the Mail app. For example, when composing an email message and attaching a PDF, it's possible to use various tools to add signatures, emphasis, and more. The same is possible with an image -- simply attach a file in a message that's being composed and right click on it, selecting Markup.

Markup has a set of tools at the top that allow users to create shapes, write text words, and insert signatures. There are different brushes that can be used, along with a color palette and various font options.

Users can enter various shapes, such as stars, circles, squares, speech bubbles and more, and there's a magnifying glass that will magnify sections of text or photos. A crop tool also allows for simple image edits, and there's a pen tool for free-handed writing or drawing. 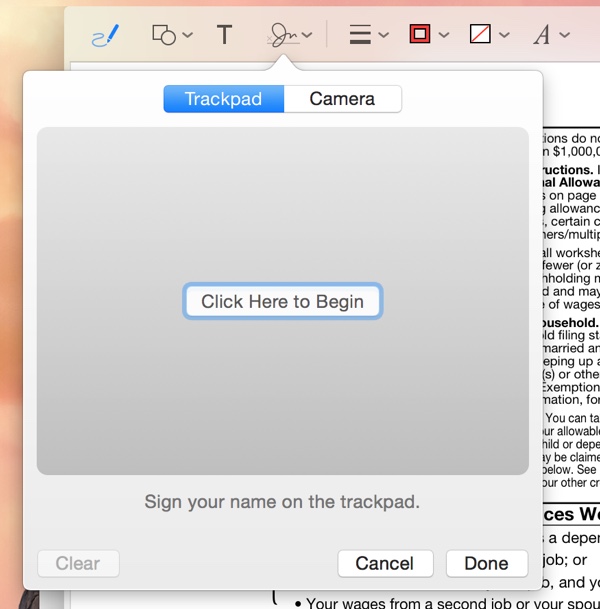 There's also an option that allows users to write a signature on a white piece of paper and use a Mac's FaceTime camera to import it into the document. It's a little bit finicky getting the camera to recognize the signature, but once it's lined up properly, the feature works well.

Along with Markup, Mail has a new feature called Mail Drop that lets users send large file attachments of up to 5GB using iCloud. Composing an email message and attaching a file that would normally be too large to send will prompt Mail to ask a user if they would like to use Mail Drop to deliver the message.

When the Mail Drop option is selected, the person receiving the email will receive the file attachment as normal if they're using Mail, while non-Mail users will receive a message with a download link that allows them to download the file directly from iCloud. Files are stored in iCloud for several days before being deleted.

MacRumors did not experience any issues getting Mail Drop to function with files ranging in size from 10MB to over 1GB, but some users on the Apple Support forums have been having trouble with the feature. Because Mail Drop works based on a sender's file size limits rather than a receiver's, users have run into an issue where they can send a file that is below their own maximum file size threshold, but above a receiver's file size limits.

According to Apple, Mail Drop can only be used to send files that "exceed the maximum size allowed by the provider of your email account," which means there is no way for a user to select a custom file size threshold to activate Mail Drop to avoid the above situation. It is not clear if Apple has plans to implement manual size controls for Mail Drop, but for the time being, it appears that Mail Drop may not be useful for all users in certain situations.

Released to the public yesterday, OS X Yosemite can be downloaded from the Mac App Store at no cost. It runs on all machines that were capable of running OS X Mountain Lion and OS X Mavericks, and it requires 8GB of storage space and 2GB of RAM. [Direct Link]

what a hideous confusing UI


Do you want to use Mail Drop?


That is too confusing for you :D ...hilarious
Rating: 11 Votes

Seem OS X 10.10 could benefit from more work before rushing it out every year since 10.7. Delta updates during beta testing over a few months for developers compared to 1-2 years prior with clean installs each beta does not a solid OS make. Quite a few open bugs that are serious enough have yet to be resolved. I'd wait for 10.10.1 before diving in.


One does not simply visit MacRumors every day and anticipate releases, only to be patient and wait for 10.10.1! :D
Rating: 7 Votes

KALLT
Didn’t Federighi say that they would focus on ‘the basics’ of Mail in Yosemite? So far the only changes I can see are the features he demonstrated during the keynote. Mail Drop and Markup are nice additions, but not ones I would use very often, if at all. I still miss features like the swipe gestures, tagging, better folder management, new e-mail rules, better spam filtering, native PGP support and so on.
Rating: 7 Votes


How do you communicate with clients, employer, online stores, insurance, banks...


Another instance where I truly miss the down vote option.
Rating: 5 Votes


daily for those who do work in an office
Rating: 5 Votes

I tried guessing an eleven-letter swear word starting with c. All I could come up with was cabbageworm.

some people will just complain about anything.


Yup, apple give an entire operating system away for free.
People still complain...

For importing my signature I just:

1. Signed a blank piece of paper
2. Scanned and saved the file to my computer
3. Opened the file in Photoshop
4. Cropped and unlocked the signature layer
4. Used the magic wand and tool and selected the white/paper background
5. Deleted the selected white/paper background leaving just the black signature
6. Saved file as a layered psd, tiff, or 'saved for web' as a png-24 file

And what do you use? :cool:


And all in just 6 easy steps that also requires Photoshop and a scanner! /s
Rating: 4 Votes

what a hideous confusing UI


What does make you confused? Those rectangular things with text written inside of them? They are called buttons. Don't worry, it's easier than it looks.
Rating: 4 Votes