OWC Announces RAM Upgrade Kits for New Retina iMac, Up to 32GB for $399

Following yesterday's launch of the new iMac with Retina 5K display, Other World Computing has announced RAM upgrade kits for the machines. These kits were previously available for the 2013 iMac, but they are also compatible with the 2014 machines.

OWC is offering three separate 1600MHz DDR3L kits to upgrade the Retina iMac's memory to up to 32GB at prices lower than Apple offers. The 8GB kit, priced at $101.99, will increase the RAM of a base Retina iMac configuration from 8GB to 16GB. 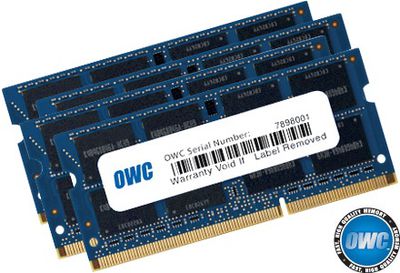 OWC is also offering a trade-in rebate for original factory memory, giving customers a credit towards the purchase of a memory kit. OWC's memory kits come with a limited lifetime warranty along with a lifetime advanced replacement program.

Released yesterday, Apple's iMac with 5K Retina display can be purchased from the Apple Store for $2,499. Current orders ship out in three to five business days.

odedia
Crucial.com offers 32gb for only 330$, and I think it's the same OEM brand that Apple uses for most of its computers.

Just pressed the purchase button on my new iMac 5K...now the agony of waiting for it to ship begins.
Score: 6 Votes (Like | Disagree)

I bet you anything it voids the warranty. :rolleyes:


The RAM slots are designed to be accessible by the user, plus Apple provides documentation for how to replace the RAM yourself, so I doubt that it voids the warranty.
Score: 5 Votes (Like | Disagree)

fruitpunch.ben
Surprise! It's still user upgradeable AND accessible!
If I'm not mistaken, that makes the 27" iMac as the last consumer Mac with user replaceable RAM. Which I'm happy about! But I was worried Apple would do something drastic with this new retina iMac and solder it on like they did with the rest of their lineup, or (in the case of the 21" iMac) socketed in an all but inaccessible iMac casing.
I believe even the retina MBPs might be soldered on?
Score: 4 Votes (Like | Disagree)

I can't wait to see what OWC will be able to offer for the new Mac Mini: quad processors, etc.


I don't see how that is going to be possible.

I bet you anything it voids the warranty. :rolleyes:


Why do you think that. Clearly states on the Apple store page, for the iMac 5K, "(four SO-DIMM slots, user accessible)".
Score: 3 Votes (Like | Disagree)

Sandstorm
:apple: dropped the ball on this one! The iMac too should be completely soldered, options are evil!

Upgrades should only be made by Apple and priced so absurdly "like ony Apple can"!

Sunday January 16, 2022 3:37 pm PST by Joe Rossignol
A bug in WebKit's implementation of a JavaScript API called IndexedDB can reveal your recent browsing history and even your identity, according to a blog post shared on Friday by browser fingerprinting service FingerprintJS. In a nutshell, the bug allows any website that uses IndexedDB to access the names of IndexedDB databases generated by other websites during a user's browsing session....
Read Full Article • 229 comments