Apple has begun accepting online pre-orders for the iPad Air 2 and the iPad mini 3 in the United States and several other countries around the world. Rumors have suggested that initial supplies of the iPad Air 2 might be somewhat constrained, so prospective buyers should make their purchases as soon as possible. All models are currently showing shipping estimates of 2-4 business days in the U.S. store.

AT&T is also accepting pre-orders on cellular models of the iPad Air 2 and iPad mini 3 with shipping estimates of 6-10 business days.

Announced on October 16, Apple’s second-generation iPad Air offers several significant improvements over the original iPad Air, including a thinner design, an A8X chip, Touch ID, 802.11ac, support for LTE Advanced, an improved 8-megapixel camera with an f/2.4 aperture, and an anti-reflective screen coating that cuts down on glare. 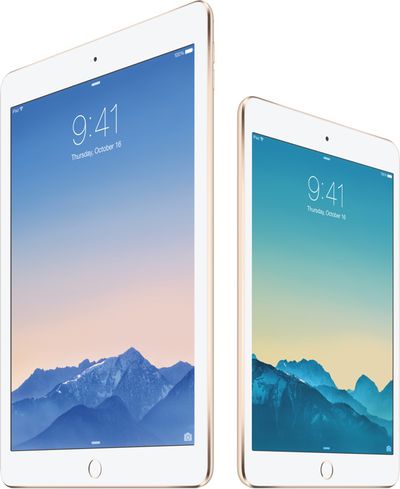 Both models can be pre-ordered immediately from Apple's online store. The company has not yet provided information on when the iPad mini 3 and the iPad Air 2 will be available in stores, giving an availability date of "later next week."

NachoGrande
Did I read that right? the iPad mini 3 is the same as the 2 except for the touch id? I'll save the $100 and key in my own passcode... or just turn it off since my iPad never leaves the house :rolleyes:
Score: 31 Votes (Like | Disagree)

Poochi
Skipping it for the first time ever. Thank you apple.
Score: 26 Votes (Like | Disagree)

Not sure why people are so obsessed with iDevices having more ram. Its obviously not that important as far as improving performance so why worry. Does it work? Yes, Is it fast? yes, Does it allow you to perform all functions you expect to perform? yes.. Now why the hell is ram so important??? lol.. Do these people even understand what ram does? Sheesh

I think what most people complain about is the tab reloading issue in Safari. And yes, these people understand what RAM does.
Score: 17 Votes (Like | Disagree)

dannyyankou
I feel bad for the people who stayed up until 3am.
Score: 15 Votes (Like | Disagree)

Not sure why people are so obsessed with iDevices having more ram. Its obviously not that important as far as improving performance so why worry. Does it work? Yes, Is it fast? yes, Does it allow you to perform all functions you expect to perform? yes.. Now why the hell is ram so important??? lol.. Do these people even understand what ram does? Sheesh