With Apple's October media event coming up later this week, the company has reportedly already begun shipping mass quantities of new product into the U.S. and appears to be setting up for a Friday, October 24 availability date, according to a source that has provided accurate information to MacRumors in the past.

The specific product being shipped was not identified by the source, but it likely is Apple's rumored upcoming iPad, though it is not clear which model -- the iPad Air 2, the Retina iPad mini 2, or both -- is being transported.

Physical mockup of iPad Air 2 with Touch ID
The timing would be consistent with Apple's usual strategy for such launches, coming just over a week after the product's introduction. With the exception of major new category products like the Apple Watch or those for which there are severe production constraints, Apple typically unveils a product and ships it within a short period of time if not on the same day. Last year, Apple announced the iPad Air and Retina iPad mini on October 22 and launched the iPad Air on November 1, with the Retina iPad mini landing a few weeks later due to short supplies.

Based on these shipping estimates, Apple likely will announce its new iPad Air 2 and possibly an updated Retina iPad mini on Thursday with a target launch date of October 24. There is no word yet on the possibility of pre-orders, but if Apple does offer a pre-order period, it will likely start very soon after the event in order to allow shipments to be positioned for delivery on launch day.

The iPad is kinda a bust. For me anyway. Especially now with bigger iPhones. They've looked basically the same all along, they basically offer the same function as my iPhone. I just don't see any reason to want/need one.. and I love looking for an excuse to buy Apple stuff. lol.


iPad air at home. iPhone plus on the go.

not at home = iphone plus

That's the scenario. Why would I want to couch surf and read on a 5.5 inch screen, when I can use the much much bigger iPad screen instead. And now with calling enabled on iPads (when on same wifi network as your iphone), I can make and receive calls on the couch if my iPhone is not near me. So yes, there is a case for both devices still.
Score: 13 Votes (Like | Disagree)

dumastudetto
These new iPads are going to be incredible. I can't wait to get my hands on them.
Score: 9 Votes (Like | Disagree) 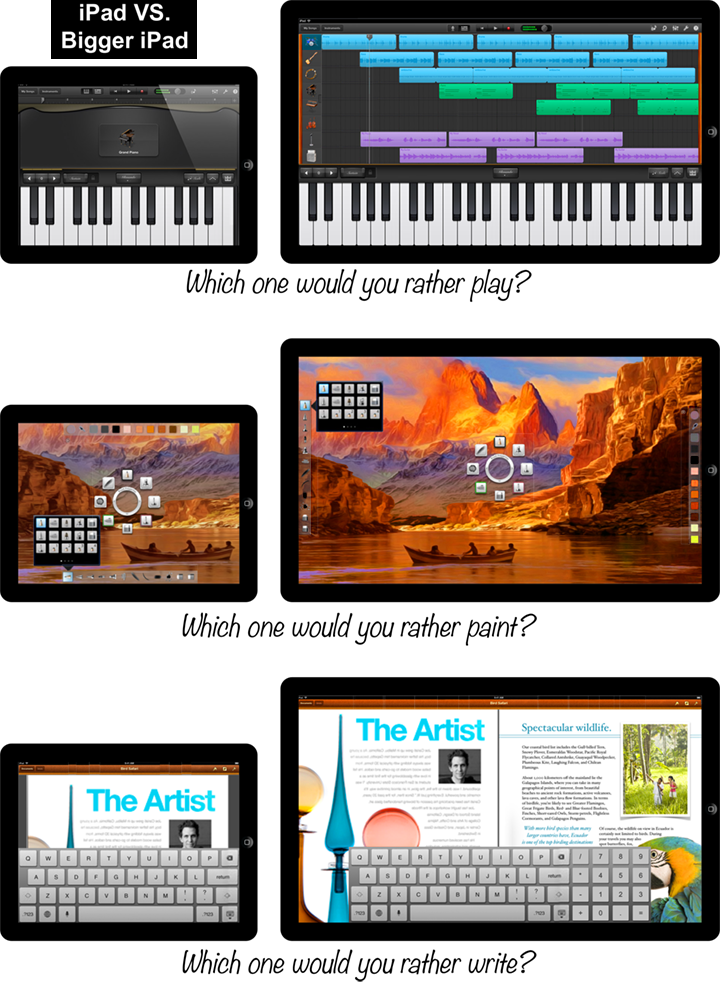 These new iPads are going to be incredible. I can't wait to get my hands on them.

Incredible is a bit strong.

"Mildly better than my current iPad air" is my current expectation.
Score: 7 Votes (Like | Disagree)

ryankul
What's the odds of a new Apple TV ? Hoping it comes soon. Really wanna get one but the current gen is way overdue.
Score: 6 Votes (Like | Disagree)

Hope there is a new Mac Mini. (I wouldn't turn down a 17" MacBook Pro either)
Score: 6 Votes (Like | Disagree)
Read All Comments

Wednesday April 21, 2021 10:31 am PDT by Juli Clover
Schematics stolen from Apple supplier Quanta Computer outline Apple's plans for the next-generation MacBook Pro models that are expected in 2021, and clearly confirm plans for additional ports and a return to MagSafe. MacRumors saw the schematics after they were leaked online, and some of them feature the logic board of the next-generation MacBook Pro. On the right side of the machine,...
Read Full Article • 494 comments

Tuesday April 20, 2021 4:23 pm PDT by Juli Clover
Apple today held its first event of 2021, and it was one of the most exciting events that we've seen in some time. Apple announced a whole slew of new products, including an M1 iMac, an M1 iPad Pro, a refreshed 4K Apple TV, and the long-awaited AirTags. Subscribe to the MacRumors YouTube channel for more videos. It took Apple an hour to introduce all of the new devices during its virtual...
Read Full Article • 126 comments