Apple Pay Roundup: Everything We Know, Coming in October

Apple Pay is Apple's new mobile payments service, which it first debuted in September alongside the iPhone 6, the iPhone 6 Plus, and the Apple Watch. Apple Pay is expected to become widely available to consumers beginning in October, and ahead of its official release, we've gathered everything that's currently known about the service into a roundup so users can get an idea of what to expect.

With Apple Pay, iPhone 6 and 6 Plus owners will be able to make payments for goods and services with their iPhones, both in stores and within participating apps, using the NFC chip built into the devices. While Apple Pay will initially be restricted to iPhone 6 and 6 Plus owners, iPhone 5, 5c, and 5s users will also be able to take advantage of the service if they purchase an Apple Watch after it is released. 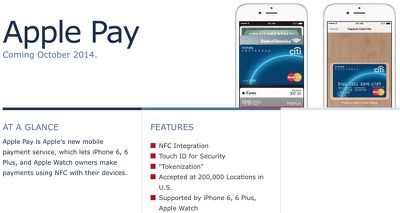 Apple has described Apple Pay as the most secure payment solution available, as it uses Device Account Numbers rather than storing credit card numbers and keeps all payment information in a dedicated chip on the iPhone, called the Secure Element.

All payments are verified using Touch ID, which prevents someone who has stolen a device to make unauthorized purchases. Furthermore, if an iPhone 6 or 6 Plus is stolen, its ability to make payments can be disabled through Find My iPhone.

Apple has said that Apple Pay will be available beginning in October, enabled through an upcoming update to iOS 8.

The Apple Pay roundup, like all of our other roundups is accessible through a dedicated index page that shows a full list of all available roundups ordered by most recent update. The roundup is also accessible directly through the "Roundups" tab in the top navigation bar on all MacRumors pages.

If you're re-upping your contract, the phone is just $199.

Desmondhuz
Tried you use my Walgreens passbook card and the cashier said the scanning system was down. But I looked down and saw a brand new nfc device scanner and remember that Walgreens was listed by Apple as an initial client. I told her about Apple Pay, which she had no clue about, and how it would start next month. She asked if I worked for Walgreens and I told her "I'm just in the know...about such things."
Score: 13 Votes (Like | Disagree)

lellis2k
Can England haz it plz
Score: 12 Votes (Like | Disagree)

While Apple Pay will initially be restricted to iPhone 6 and 6 Plus owners, iPhone 5, 5c, and 5s users will also be able to take advantage of the service if they purchase an Apple Watch after it is released.


LOL! It would probably be more cost-effective to upgrade to an iPhone 6 instead. Why spend money on an accessory to help you spend money?
Score: 9 Votes (Like | Disagree)

Hmm. Won't there be any sort of branding? How will we know if it takes Apple Pay?

Normally, the terminal identifies your debit card or credit card.

The NFC terminal has no idea what was going on. It only knows that it was given details of a card (it doesn't know it was a virtual card) and that Visa accepted the card.

And presumably Apple Pay, Google Wallet, ISIS (no, not those *******s who behead people) and all other NFC based systems follow the same standard and send essentially the same data (albeit encrypted with different keys, no not bit for bit identical) to the card reader, so how is Apple Pay any more secure than the others?

With Apple Pay, _nobody_ will ever see your credit card number. That includes Apple. Your credit card number cannot be stolen because nobody ever has it. That's different with Google Wallet. And Apple Pay requires a secure chip in the iPhone that does all the work, and that chip is not hackable.
Score: 8 Votes (Like | Disagree)

Corrode
Hopefully all the kinks will be worked out and it'll be available in Canada by the time the 6S is released.
Score: 7 Votes (Like | Disagree)
Read All Comments