With Apple's retail stores beginning sales of the iPhone 6 and 6 Plus today, customers have been lining up to either pick up their pre-ordered devices or take their chances on launch-day supplies without reservations. Piper Jaffray analyst Gene Munster conducted his annual line count at Apple's flagship Fifth Avenue store in Manhattan and found a record 1,880 people in line at 8:00 AM, an increase of 33% over last year's line. 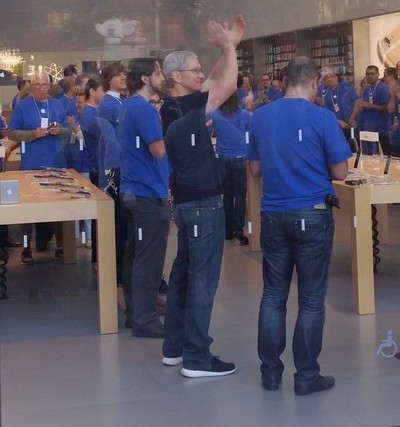 Tim Cook at final employee meeting before opening doors of Palo Alto store (via @CNBCnow)
Apple executives are also getting into the spirit of the iPhone launch, with CEO Tim Cook making his traditional visit to the Palo Alto store to greet customers. Cook walked the line and posed for photos with customers before heading into the store to meet with staff and open the door to welcome customers.

Several other executives are also out and about, with new retail chief Angela Ahrendts presiding over her first iPhone launch by visiting the flagship store in Sydney, Australia, and Internet software and services chief Eddy Cue making an appearance at the Stanford store.

Phenomenal start to a historic day and an honor to be with our incredible team and first customers in Sydney. pic.twitter.com/28aww07wGj — Angela Ahrendts (@AngelaAhrendts) September 18, 2014

Nearly all Apple retail stores in launch countries have now opened for business today, with only the three stores in Honolulu, Hawaii yet to begin sales of the iPhone 6 and 6 Plus.
Tag: Tim Cook
Related Forum: iPhone
[ 119 comments ]

The guy standing to the right of Tim Cook - he's got a black device clipped to his belt (right hip). Does not look to be an:apple: device (huge antenna sticking out)... You stand right next to the CEO of Apple with a non -Apple device?? :|

ericschmerick
I think this is awesome. The CEO of a $180 billion company meeting and greeting customers in a t-shirt on a public sidewalk. Whether or not you think the hype around each new Apple product is crazy, there is a genuine passion and enthusiasm here that just doesn't exist for basically any other company or product, and that passion exists both inside and outside the company.
Score: 33 Votes (Like | Disagree)

Tim is just visiting a Genious rep to figure out where his camera roll and all the missing pictures have went with iOS 8.
Score: 25 Votes (Like | Disagree)


Is there a standardized dress code on how people should dress as they age?
Score: 11 Votes (Like | Disagree)

gugy
Go Tim!
I like how involved he is on these sort of events.
Score: 11 Votes (Like | Disagree)

If I were there and had a chance to talk to Tim Cook, I'd ask him when they are planning to include 2 GB RAM on the iPhone and iPad so that I don't have to compose forums posts in the Notes app and then copy paste into the forum site. I'd tell him 1 GB RAM isn't sufficient for power users - if you can call copying and pasting stuff from multiple Safari tabs into one tab and hoping it won't refresh on you a power user scenario.


you must be real fun at parties
Score: 10 Votes (Like | Disagree)
Read All Comments