Ive on Apple Watch: One of the Most Difficult Projects I've Ever Worked On

In a wide ranging interview with Bloomberg covering culture changes at Apple, Tim Cook's personality, the company's move into Apple Pay, and the development of the Apple Watch, Tim Cook, Jony Ive, and Jeff Williams share some fascinating details on the work that went into creating Apple's new wearable device.

According to Jony Ive, Apple first began developing the Apple Watch three years ago, before wearables caught on in Silicon Valley. The Apple Watch, he says, is "probably one of the most difficult projects I have ever worked on." A huge amount of research was conducted for the watch, which was touched on at Apple's introductory keynote event. 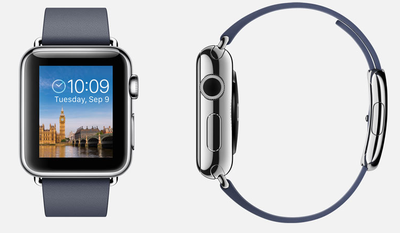 Apple invited several watch historians to speak at Cupertino, with one, French author and antique expert Dominique Fléchon saying that discussion centered around "the philosophy of instruments for measuring time." Ive himself delved into horological history, studying clocks and watches throughout time.

Clocks first popped up on top of towers in the center of towns and over time were gradually miniaturized, appearing on belt buckles, as neck pendants, and inside trouser pockets. They eventually migrated to the wrist, first as a way for ship captains to tell time while keeping their hands firmly locked on the wheel. "What was interesting is that it took centuries to find the wrist and then it didn't go anywhere else," Ive says. "I would argue the wrist is the right place for the technology."

Ive and his team experimented with a variety of interface interactions for the Apple Watch, including pinch-to-zoom, which the company joked about during the keynote as an unsuitable way to use the device because fingers cover the small screen. The team settled on the "digital crown" a physical button that can be used for a variety of tasks, including scrolling through options and accessing the home button. Ive went on to develop high-quality wristbands and unique packaging that "doubles as a charging stand."

A staggering number of employees with various specialties worked on the Apple Watch, under the direction of Apple's VP of operations, Jeff Williams. Hundreds of designers and engineers came together to design the S1 processor in the device, the heart rate sensor, and the special alloys used in casings and bands.

According to Williams, while Apple could have launched a watch in time for the holiday season, it wouldn't have been "at the fit and finish and quality and integration of these products." Apple wanted to make "the best product in the world" and is "willing to wait."

Apple's first wearable device is expected to be available to consumers in early 2015. Pricing details remain largely unknown, with the company stating that pricing will start at $349.

Cook and Ive's complete interview with Bloomberg, which also has several details on how Apple runs under Cook, Cook's personality and values, Jobs' ongoing influence, recent hirings and acquisitions, and Apple's partnership with IBM, is well worth reading to get a glimpse inside the walls of Apple's Cupertino headquarters.

Xeyad
Hardest project you've ever worked on because you didn't have a visionary to tell you what to do.
Score: 42 Votes (Like | Disagree)

GoPro
No wonder the iPhone 6 rear design is bad (despite what many of you say), all his time went on this watch that nobody will buy!
Score: 32 Votes (Like | Disagree)

yadmonkey
Amazing how Steve was such a unique visionary, yet so many around here know exactly what his decisions/visions would/wouldn't have been today.
Score: 29 Votes (Like | Disagree)

No wonder the iPhone 6 rear design is bad (despite what many of you say), all his time went on this watch that nobody will buy!

You still need to have an iPhone on you to use the best parts of the watch. Jobs would never allow this.


Yes, because Steve could have just conjured up watch battery that can power a GPS, cell, and Wifi antenna all day.
Score: 25 Votes (Like | Disagree)

Locoboof
All the time and effort spent clearly shows. I love the design and functionality.
Score: 16 Votes (Like | Disagree)
Read All Comments