Netflix Launches in Germany, Including on Apple TV 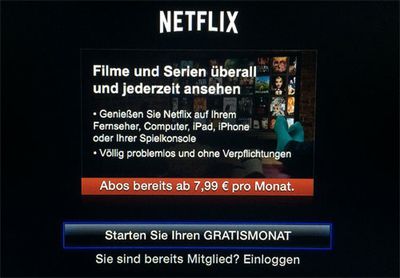 Apple has significantly expanded content offerings on the Apple TV over the past year or two, but many of the additions have been limited to the United States. The Netflix channel has, however, been available in many of the markets served by Netflix, which has included the U.S., Latin America, and a number of countries in Europe. As a result, it is unsurprising that the channel has expanded to Germany, but viewers there will be happy to see Apple TV support arriving right alongside the general launch of Netflix in the country.

How Netflix for U.S. start adding movies and TV Shows instead of worrying about expanding when the company started here first.


Pretty sure Netflix will make more money expanding vs. adding more movies. It's called business. Do you really think they aren't trying to do both?
Score: 5 Votes (Like | Disagree)

How Netflix for U.S. start adding movies and TV Shows instead of worrying about expanding when the company started here first.


How dares an American company try to take money from foreigners.
Score: 5 Votes (Like | Disagree)

So far everything I tried on the Apple TV Netflix channel is english/original sound. In the web-app I can actually switch between german and english. Havent found that switch in the Apple TV channel though.

Say you want to watch an original US series in English, and then a German film in German instead of dubbed in English... you need to go back to the main Apple TV menu and change the language again.
The whole system is thought out for people who only understand one language...somebody needs to tell our US friends that even *their* brains can handle more ;-)

You can just change the language on-the-fly whenever you want while watching the movie/show by holding down the button in the center on your remote (or the option button in the lower left of your remote app). It even supports subtitles.
Score: 1 Votes (Like | Disagree)

Damn, it is just on the website? so on the Apple TV is it german by default??

Usually Netflix on Apple TV (or on Rokus) does NOT have a specific language setting, it uses the language setting of the main device. So you should define English as the language of your German Apple TV, and the German Netflix should automatically stream in English (of course, if the said show is available in Germany with the original track).
I haven't tried, but that's usually the way it works on TV Streaming devices.

I admit this isn't practical for many European users.
Say you want to watch an original US series in English, and then a German film in German instead of dubbed in English... you need to go back to the main Apple TV menu and change the language again.
The whole system is thought out for people who only understand one language...somebody needs to tell our US friends that even *their* brains can handle more ;-)
Score: 1 Votes (Like | Disagree)

Anyone know if it will give the option to watch original content in the original language? 99% of content on German TV is dubbed. A lot of my German friends would welcome the ability to watch in English with either English or German subtitles...


Yeah, they have both languages. Thats why I was waiting for netflix for so long... However I guess they only got a 2TB server for Germany, since the the available content is pretty limited.
Score: 1 Votes (Like | Disagree)

TsMkLg068426
How Netflix for U.S. start adding movies and TV Shows instead of worrying about expanding when the company started here first.
Score: 1 Votes (Like | Disagree)
Read All Comments