Apple today released the fifth beta of iOS 8, which brings a number of improvements, tweaks, and bug fixes to the beta software that was first introduced on June 2.

iOS 8 beta 5, like previous betas, includes several minor interface modifications designed to make iOS 8 feel faster and more polished. We've gathered up a comprehensive list of all the enhancements that have been bundled into the new beta release below, and to find out about all of the under-the-radar changes in iOS 8 so far, make sure to check out our iOS 8 Hidden Features Roundup.

Health: According to the beta's release notes, Apple's Health app now collects Spirometry data. Spirometry tests measure lung function, tracking the volume and flow of air when inhaling and exhaling. The app has gained several new icons, the ability to export Health data, and a "Show When Logged" option to display Medical ID on the lock screen. There are also privacy settings for Health in the Settings app.

SMS Relay: iOS 8 users are getting a popup that asks them to use their phone numbers for SMS Relay on their MacBooks, one of the new Continuity features between OS X Yosemite and iOS 8. 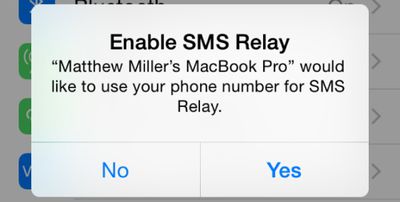 iCloud icons: iCloud Drive, Backup, and Keychain have new icons in the iCloud section of the Settings app. The overall iCloud icon has also been updated, featuring a white cloud on a field of blue.

WiFi Calling: When WiFi calling is enabled, it's now labeled T-Mobile WiFi at the top of the iPhone screen.

Additional features in iOS 8 beta 5 will be added here as they are discovered. Apple is likely to continue pushing regular updates to iOS 8 at two or three-week intervals to bring minor performance boosts and changes ahead of the operating system's launch. For more information on iOS 8's features, major and minor, make sure to check out our roundups.

AngerDanger
It's interesting to think that an actual human designed the menu area here:

I hope Apple innovates a method of consolidating those dots into, say, thin vertical rectangles. They could even be called something like poles… or… bars. :rolleyes:
Score: 21 Votes (Like | Disagree)

iBlazed
I like the new icloud icons. Actually the whole OS is just great. Beta 5 is already a solid upgrade over iOS 7 and this really puts the final touches on the aesthetics.
Score: 13 Votes (Like | Disagree)

dlewis23
The T-Moible Wi-Fi is a little big for the status bar.

I'm trying to understand? Is this so messages can relay ALL types of messages not just iMessage or is this something different?

It means it will forward SMS messages (the green ones) to your iPad or mac.
Score: 10 Votes (Like | Disagree)

It's interesting to think that an actual human designed the menu area here:

I hope Apple innovates a method of consolidating those dots into, say, thin vertical rectangles. They could even be called something like poles… or… bars. :rolleyes:

Agreed with this. Btw... why does the carrier name need to even appear on the top? Makes no sense to me. As an example, my work Android phone does not have this at all, so I know it can't be a "carrier mandated" thing.

Apple, please get rid of the carrier name in the menu bar. It's totally unnecessary and redundant. The user *already knows* what carrier he/she belongs to!

dav465
I really like the idea of icloud drive but 5GB is stingy. With all of the other major companies offering around 15gb for free, do you think Apple may change their minds and offer 15gb as well? Let alone flickr give 1TB for free storage and auto upload!
Granted their prices for extra storage aren't extortionate but 5GB really is a bit mean IMO.
Score: 3 Votes (Like | Disagree)

Dan70
I've just seen another update, the AirDrop icon when selecting pictures has been re-done to fit in with the buttons at the button. Not a big change but looks nicer I think.
Score: 3 Votes (Like | Disagree)
Read All Comments