According to Coppertino founder Ivan Ablamskiy, Vox is the only third-party music player that allows users to access and play original lossless files from SoundCloud. 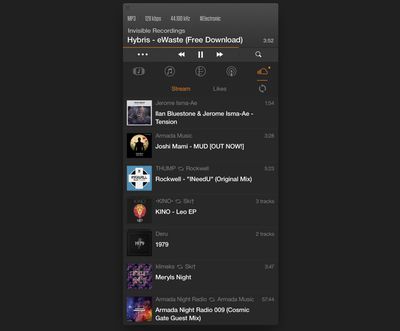 Along with SoundCloud integration, Vox has also gained some new interface updates that make it easier to access and create playlists within the app, including "Collections," a new way to intuitively organize music. A full list of updated features can be found below:

- Updated and improved modern and clean interface;
- Ability to stream SoundCloud files in high quality music formats (when the original file is a lossless or HQ audio file);
- Simplified access to all playlists, including iTunes;
- Convenient creation and management of playlists within VOX;
- Custom playlists from various sources;
- Easily queue a song to play it next;
- Full access to the largest database of radio stations and music from all over the world;
- Redesigned and more intelligent 'Search' capability;
- Numerous bug fixes and more.

Originally launched in August of 2013, Vox is a simple music player designed to serve as a replacement for the music player built into iTunes. It supports a wide variety of audio formats, including MP3, FLAC, AAC, Musepack, Ogg Vorbis, WAV, and more. Vox has the ability to import an existing iTunes library with metadata included and it also offers a built-in equalizer, radio connectivity, and gapless playback.

While Vox is currently limited to the Mac, Coppertino is working on an iOS app that's expected to debut in the fall. According to a source that spoke to MacRumors, Coppertino is also working on an upcoming cloud music service, designed to allow Vox users to access their music on both the iPhone and Mac. The service will reportedly include unlimited music storage for a small yearly fee, with the ability to store any type of audio file, including HD.

The newly updated Vox app for the Mac is available from the Mac App Store for free. [Direct Link]

justperry
By no means an itunes replacement, window displays way too little, not a good player at all.

Give me back iTunes music player as it was way in the beginning, not this bloathed iTunes 10-11-12 crap.
Score: 3 Votes (Like | Disagree)

I've been using Vox since Coppertino first put it in the app store. It's one of the rare cases where an app is SO brilliant that I wish there was a way to pay for it. At the time I got it, the only way to pay was to get the radio streaming service for 99 cents. I don't even use it, but the app is so good I wanted to pay. I wish they made more apps than they do. Can't wait to see how this update compares, wasn't impressed with Match at all.


The radio now costs $2.99. But alas, you can only purchase it once. Well, you're in luck! I will gladly let you send me the money to purchase radio for my account! This would increase your total donation from $1 to $4! Aren't you glad you have friends like me?
Score: 2 Votes (Like | Disagree)

The app should go live in the Mac App Store at anytime now, but you guys can download the new version immediately here: http://coppertino.com/getVox/

Thanks for the link, 2.1 installs fine. However, the DMG file mounts as a volume called "Vox Beta". This IS the finished version, not a beta, correct?

Also, the radio functionality does not work.
Score: 1 Votes (Like | Disagree)


I tried it yesterday. Yes, you can send stuff via Airplay to an AppleTV, but that's not the same as sharing your library of videos with AppleTV in a way that it can access it on its own. Besides, VOX appears to be audio only and frankly after trying the interface, I concluded it's too difficult to manage a large library. There are zero provisions for sort by things other than artist or album and it won't sort created playlists from other sources than iTunes differentiated by album with some kind of delimiters to show at a glance where one album starts and another ends since it just keeps the track numbers going on forever). In short, it's more difficult to find music I might be looking for compared to iTunes without resorting to a search (which iTunes can also do). Frankly, I don't see what is compelling about this player to people other than being "smaller" with less features for those that don't do video, etc. as well. I'm still stuck with iTunes regardless to maintain any iOS devices and feed video to ATVs that aren't running XBMC.

I kept a copy around anyway, though since it can play FLAC files directly and its interface still seems preferable to VLC's. Really, though, I can just use ALAC instead of FLAC and convert any FLAC I already have to ALAC using XLD and then iTunes can use them directly except for the fact that I don't like maintaining duplicates and I keep AAC versions for car/iPod use and leave LP 24/96 conversions in their own directories for XBMC to handle, but XBMC is pretty much a PITA to use for desktop type use while doing something else, IMO).

Actually XLD will convert just about any audio format to any other format with ease. FLAC does have one advantage over ALAC, though and that is the ability to encode multi-channel music. I can use DTS with my 1st Gen ATVs and XBMC, but regular DTS is lossy.
Score: 1 Votes (Like | Disagree)

Can this Vox player serve my AppleTV units? 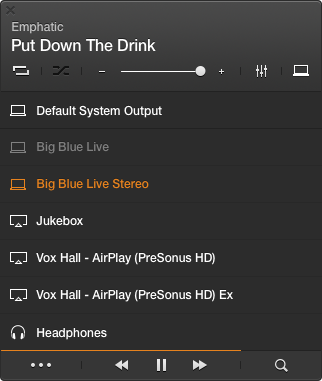 
And... it doesn't. Maybe you guys should focus on the important stuff for audio players like, y'know, audio file compatibility before adding ridiculous features like lossless audio streaming (but thanks for supporting the next big thing in audiophile snake-oil)
Score: 1 Votes (Like | Disagree)
Read All Comments

Saturday February 4, 2023 1:30 am PST by Hartley Charlton
Google's Chromium developers are working on an experimental web browser for iOS that would break Apple's browser engine restrictions, The Register reports. The experimental browser, which is being actively pursued by developers, uses Google's Blink engine. Yet if Google attempted to release it on the App Store, it would not pass Apple's App Review process. Apple's App Store rules dictate...
Read Full Article • 200 comments