Apple has acquired BookLamp, a "Pandora for books" startup that aimed to provide personalized book recommendations to readers via specialized algorithms, reports TechCrunch. BookLamp first shut down in April.

BookLamp was known for its Book Genome project, a book discovery engine that analyzed the text of books to break them down by various themes and variables to let readers search for books similar to books they liked.

For example, analyzing The Da Vinci Code, the search engine would break it down to elements of 18.6% Religion and Religions Institutions, 9.4% Police & Murder Investigation, 8.2% Art and Art Galleries, and 6.7% Secret Societies and Communities, and then it would be able to recommend a book similar to The Da Vinci Code based on that data. 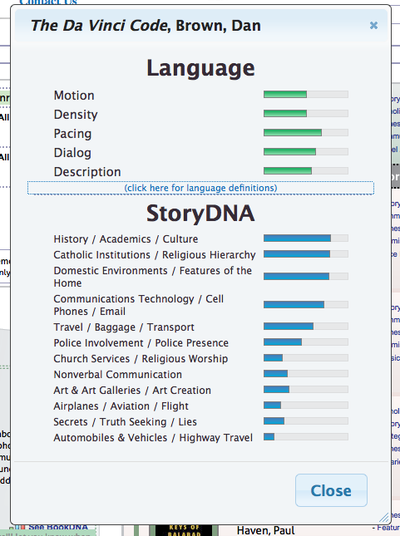 BookLamp screenshot via Mashable
This type of analytics service could be directly used to improve recommendations and search in iBooks, and as noted by TechCrunch, BookLamp's technology could be used to create a competitor to Amazon X-Ray, which lets readers see where in the book certain terms or characters appear.

BookLamp also provided content analysis services to a number of e-book distributors like Amazon, Apple, and other publishers, screening books for categorization and providing a platform for publishers to screen manuscripts. The acquisition will see Apple ramping up its focus on books, according to one source with knowledge of the acquisition.

Part of the reason that Apple made the move to acquire BookLamp was because of this long list of clients. "At first Apple and BookLamp talked about growing their contract, but then they talked more from a strategic standpoint," a source says. "What Apple wanted to do was, instead of contract, they wanted to make sure whatever work was done was done just for them."

And what is that work? The details are not clear yet, but the source says, "in broad strokes, the goal that [founder Aaron] Stanton and three of the folks he was working with from the original BookLamp crew is to beat Amazon at their own game."

BookLamp was purchased for a sum between $10 million and $15 million and while Apple has yet to confirm the purchase, a large amount evidence gathered by TechCrunch suggests several former BookLamp employees have relocated to Cupertino and are now working for Apple.

Update 6:30 PM PT: Apple has confirmed the purchase of BookLamp, giving Re/code its standard statement on purchases: "Apple buys smaller technology companies from time to time, and we generally do not discuss our purpose or plans."

troop231
Scared me for a second, am I the only one who initially thought it said: "Apple acquires Pandora..." :eek:
Score: 11 Votes (Like | Disagree)

Ent
Am I the only one who thought that was a pop-up on MR and tried closing it?
Score: 3 Votes (Like | Disagree)

As an avid Audible subscriber - I am curious as to how much profit there is in written word. I'm also in grad school, so I know how much books cost, but when I do any "reading" outside of school it's in my car or while I mow the lawn using audible.


I like audio books but I must say that I find it odd that a graduate student can't see the value of the printed word. For one thing most audiobooks are abridged. Are you not curious about what is missing? Many books have maps, charts, illustrations, photos and other visual data that doesn't translate to audio at all. I often pause and ruminate over particular passages in printed books, contemplating either the beauty of the prose or the underlying meaning. With audiobooks this is impossible as the narration barrels ahead. Anyway, since you are budding academic I would ask that you consider these points.
Score: 2 Votes (Like | Disagree)

Then they are no longer research papers. Looks pretty useless to me.


It's pretty hard for the grade-schoolers, on MR, to understand the need.
Score: 2 Votes (Like | Disagree)
Read All Comments