Apple's recent EFI Firmware 2.9 update for 2011 MacBook Air models appears to be causing trouble for several MacBook Air users, according to a thread on the Apple Support Communities.

Released on July 15 to fix sleep/wake issues and a bug that caused fans to run at full speed after waking from sleep, the EFI update has caused some MacBook Air machines to shut down completely for several hours and on other machines, the update is still listed in the App Store after being installed. 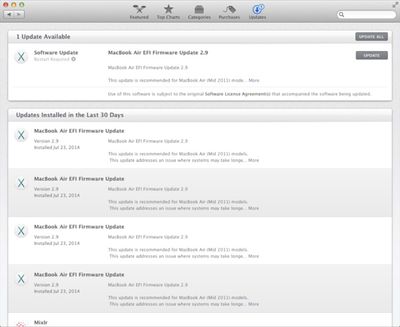 One user attempted to install the update multiple times with no luck, while another user took his machine to the Apple Store where employees were also unable to get the update to install.

I had the same issue. The machine simply shuts off and doesn't restart so the firmware update is never applied. The power button stopped working and the machine would not turn on at all. So I took it the the Apple Store and they cracked it open to do a physical SMC reset.

It booted up fine after that. We tried the install again and no dice. Same thing happened. This time the guy at the Genius Bar did some kind of "soft" SMC reset. He pressed SHIFT+FN+CONTROL+POWER at the same time (the first 3 keys are in the lower left corner) ... held it for a few seconds and let them go. When he pressed the Power button after that the machine booted up fine. Still didn't apply the firmware update though. The guy at the Genius Bar said he would report this issue to Engineering to alert them to the problem with the update.

It is not clear if the issue is widespread or limited to just a 2011 MacBook Air users, but as none of the affected users in the thread have discovered a solution, those who have not yet attempted to install the 2.9 update might wait to wait for an official fix from Apple.

Title implies that installing this EFI firmware will bug your MBA.
Score: 3 Votes (Like | Disagree)

gavroche
My install took a very long time to restart after reboot. Thought it was bricked. Was in process of researching the issue on the iPad when it finally rebooted. My points of note:
1) Definitely starts from sleep more rapidly now. Love this.
2) Having issues with wi-fi now. Specifically, after waking the computer from sleep, nearly every single time the wifi network is no longer chosen and active. I have to wait for it to scan for available networks, and select correct one to join. Annoying.
Score: 1 Votes (Like | Disagree)

TheGarreth
BoyRacer, your update did not install. The current version MBA41.0077.B0F was the previous version we were all running on. For a short time yesterday after the update was released, Apple's firmware page was updated to reflect MBA41.0077.B11F as being the current version - they have since, having realized this was a bad/erroneous update, canceled the software update & revised that page to show MBA41.0077B0F as being the current version.
From everything I'm reading, it's pretty apparent that the new EFI didn't actually install for anyone.
Score: 1 Votes (Like | Disagree)

Title implies that installing this EFI firmware will bug your MBA.

Exotic-Car Man
Reminds me of the June 2012 Thunderbolt update (https://www.macrumors.com/2012/06/12/thunderbolt-software-update-1-2-causing-boot-failures-for-some-users/) boot failures. That one caused my iMac to kernel panic. Luckily, I had a backup. The lesson to be learned is: always backup before installing an update that requires a reboot!
Score: 1 Votes (Like | Disagree)
Read All Comments

Thursday January 26, 2023 6:30 am PST by Tim Hardwick
The new Mac Pro coming later this year is expected to feature the same spacious modular design as the 2019 model, but with fresh concerns over its lack of upgradeability surfacing, some users are beginning to wonder what the transition away from Intel architecture actually means for Apple's most powerful Mac. The current Intel Mac Pro that Apple sells is popular with creative professionals...
Read Full Article • 492 comments