Netflix for the Apple TV was updated today to add a new "Up Next" feature, which lets users automatically select the next episode of a television show for playback. While easy playback of the next episode in a series has been long available on the web and in the Netflix app for iOS devices, it's been noticeably missing from the Apple TV.

Prior to today's update, Apple TV users were forced to return to the main series menu to initiate the playback of the next episode of a television show, a task that required several extra button clicks. As of today, episodes in a series will play automatically, requiring far less interaction with the Apple TV remote. 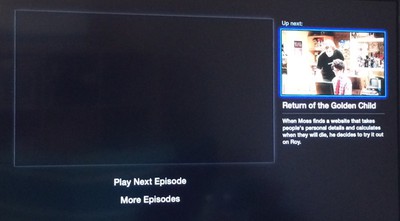 Netflix's new Apple TV feature comes as the company announces its Q2 financial results, with a total 50.05 million subscribers, up from 37.56 million in Q2 2013. Netflix saw $1.34 billion in total revenue during the quarter, with net income of $71 million.


Prior to today's update, Apple TV users were forced to return to the main series menu to initiate the playback of the next episode of a television show, a task that required several extra button clicks. As of today, playing the next episode of a series requires only a single click on the remote as the "Play Next Episode" option pops up as soon as an episode ends.


This has to be the most first world problem paragraph I've ever read.
Score: 10 Votes (Like | Disagree)

As of today, playing the next episode of a series requires only a single click on the remote as the "Play Next Episode" option pops up as soon as an episode ends.

"Play Next Episode" on the Apple TV is slightly different from the playback feature on iOS devices and on the web, which begin playing the next episode in a series automatically after a short countdown timer. The Apple TV still requires user interaction to play a new episode.

I don't care about automatically playing it but I do mind the extra clicks to go back to the main list of episodes every single time.

I'm actually glad it doesn't automatically play the next episode for you, personally.
Score: 4 Votes (Like | Disagree)

Up next works like crap too. Keeps popping up and then switching waaaay before an episode is over and you have to hit menu to stop it. I hate it.
Score: 3 Votes (Like | Disagree)

t22design
I hate this 'feature' on PS3. (fortunately you can turn it off via the Netflix website)

You can't even dwell on the end of an episode / film anymore without being instantly kicked out of the moment by the screen shrinking to a tiny size and it force feeding you more TV / Films.

I'd love an option to 'let the credits roll'
Score: 3 Votes (Like | Disagree)

This has to be the most first world problem paragraph I've ever read.

Pretty much applies to all of Netflix in general, or much of personal computing overall really.
Score: 3 Votes (Like | Disagree)
Read All Comments

Saturday January 23, 2021 6:00 am PST by MacRumors Staff
We continued to hear a lot more about Apple's plans for its Mac lineup this week, including word of a high-end redesigned MacBook Air and the return of an SD card slot as part of the upcoming MacBook Pro redesign. It also sounds like Apple has been working on Face ID for Mac, but it won't be appearing in a redesigned iMac this year as originally planned. This week also saw rumors about the...
Read Full Article • 46 comments

Thursday January 21, 2021 11:58 am PST by Juli Clover
Apple's upcoming iOS 15 operating system, which we expect to see unveiled in June, is rumored to be dropping support for a few of Apple's older iPhones. According to French site iPhoneSoft, iOS 15 will not be able to be installed on the iPhone 6s, the iPhone 6s Plus, or the 2016 iPhone SE, all of which have an A9 chip. The iPhone 6s and 6s Plus were introduced in 2015 and are now more...
Read Full Article • 194 comments

Friday January 22, 2021 7:50 am PST by Joe Rossignol
Last week, reputable analyst Ming-Chi Kuo outlined his expectations for new 14-inch and 16-inch MacBook Pro models later this year, including the return of the MagSafe charging connector, the removal of the Touch Bar, a new flat-edged design, and the return of more ports built into the notebooks for expanded connectivity. A concept of a modern MacBook Pro with an SD card reader Kuo did not...
Read Full Article • 459 comments

Friday January 22, 2021 2:34 pm PST by Juli Clover
Samsung in January unveiled new flagship Galaxy S21 smartphones and alongside the new phones, introduced the $200 Galaxy Buds Pro, which are priced at $199 and offer Active Noise Cancellation. Subscribe to the MacRumors YouTube channel for more videos. These new Galaxy Buds Pro are clearly designed to compete with Apple's AirPods Pro, so we thought we'd compare the two sets of earbuds in our...
Read Full Article • 73 comments

Thursday January 21, 2021 11:36 am PST by Juli Clover
A video demonstrating macOS Catalina running on a current 2020 iPad Pro has been shared on YouTube, giving us a look at an interesting hack that has a Mac OS up and working on one of Apple's iPads. There's limited information about how the process of getting macOS Catalina on an iPad Pro works, but it uses x86 emulation and was done through the UTM software that allows virtual machines to...
Read Full Article • 60 comments

Thursday January 21, 2021 10:14 am PST by Juli Clover
Apple today seeded the RC version of upcoming iOS 14.4 and iPadOS 14.4 updates to developers for testing purposes, with the new betas coming a week after Apple released the second betas. iOS 14.4 and iPadOS 14.4 can be downloaded through the Apple Developer Center or over the air after the proper profile has been installed on an iPhone or iPad. Paired with the HomePod 14.4 beta that is...
Read Full Article • 61 comments