According to Apple, its latest models, including the iPhone 5s, 5c, and iPad Air are not eligible for the credit, nor are first-generation devices like the iPhone 3GS or the original iPad. All other devices are eligible, however, and Apple will still recycle original models for free. 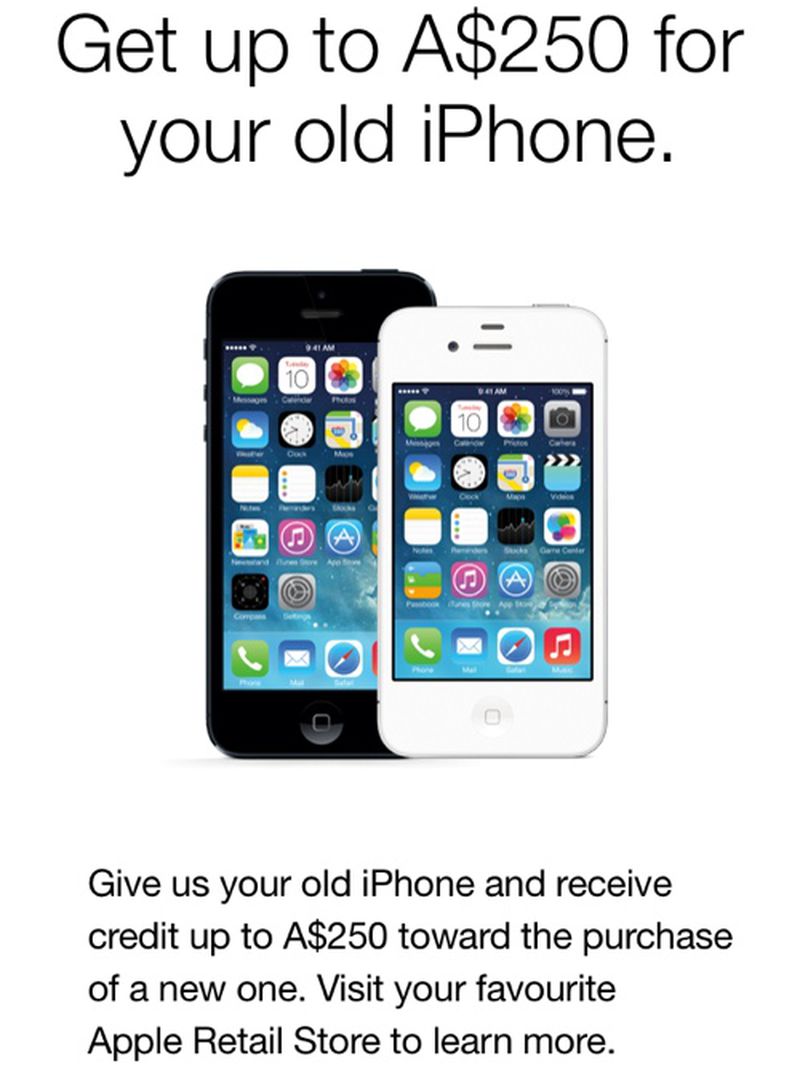 Apple's trade-in program first debuted in the United States prior to the launch of the iPhone 5s/5c, and expanded to the U.K. a few months later. It has also been brought to several other countries, including Germany, France, Canada, and Italy.

In addition to its in-store recycling program, Apple has a similar online mail-in program that requires users to send in their old iPhones before receiving credit. While the mail-in program often offers a greater value for a used iPhone, Apple's in-store program is more convenient for many customers.


You may get more from eBay but trading in is easy for the average consumer.


This. eBay in Australia is full of scammers, plus setting up an account and selling something is much more work than just going down to an Apple store and trading in your iPhone/iPad.
Rating: 1 Votes

fermat-au
... giving them an incentive to remain in Apple's ecosystem rather than defecting to rivals such as Samsung.
-ninemsn story (http://news.ninemsn.com.au/national/2014/07/15/10/13/apple-brings-trade-in-program-to-australia)

I think that these trade in programs are largely about keeping people in the Apple/iOS ecosystem.

I assume that the credit can only be used to buy an iPhone out right from Apple, not a subsidised iPhone from a carrier. In Australia the 5s 16GB is $869 so even if you get the full $250 credit you still pay $619.

What do Apple do with all the 'old' iPhone and iPads?

Wont you just get more by selling it online? Apple devices seem to have a pretty good resale value, at least a better one than what Apple offers for it.

You may get more from eBay but trading in is easy for the average consumer.
Rating: 1 Votes
[ Read All Comments ]