Automatic today announced a major update for its Automatic app and connected driving platform, introducing a significant app overhaul with a revamped UI designed to be "lighter, faster, and more modern."

Along with a new look, the Automatic app now provides data on fuel level and gives low fuel warnings. In supported cars, fuel level will be displayed directly in the iPhone app, along with an estimate of the miles left in the tank based on driving habits. Users are able to set an alert to be warned when they're low on gas. 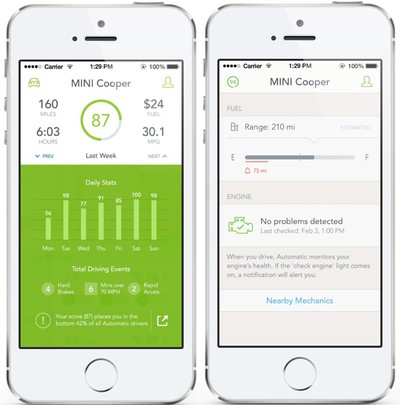 Automatic's new fuel data is only available to approximately half of cars using the Automatic system, as many cars do not report their fuel level through the diagnostic port. Automatic recommends checking whether a car supports fuel data on its website.

With the new app update, consumers will also be able to change the speed at which Automatic delivers alerts for driving too fast. Previously set at 70 MPH, users will now be able to choose a custom speed, which is useful for states with higher or lower speed limits. Along with customizable speed thresholds, Automatic is also improving how customers are warned when driving too fast, cutting down on the number of warning chirps.

Now, consumers will only hear the chirp once when you cross the threshold. The chirp won't repeat for the rest of the trip unless a person dips below the threshold and crosses it again.

unplugme71
I don't see how a fuel gauge warning indicator is needed. I can simply look at my dashboard and see my low-fuel indicator light appear. I don't have to distract myself by looking at my iPhone.

I can say for sure a 98 Firebird doesn't.


Well, it's not like GM's ever cut corners to save a few dollars per car or anything ;)
Score: 1 Votes (Like | Disagree)

BJB Productions
Wish they would've put some effort into actually improving the app by integrating more statistics. They do so little with all the information the link could be collecting.
Score: 1 Votes (Like | Disagree)


Probably because, unfortunately for you, your car is in working condition. :D
Score: 1 Votes (Like | Disagree)
Read All Comments